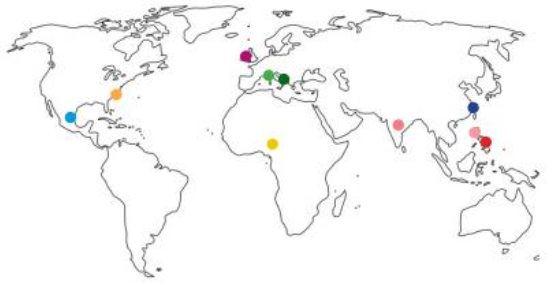 Ireland is considered the birthplace of what we consider to be Halloween today. The origins of the fun and spooky holiday come from ancient Celtic and pagan rituals, during which a festival called Samhain took place to celebrate a half-year marker. Today, both Ireland and Scotland celebrate Halloween with bonfires, games and traditional foods like barmbrack, a fruitcake with coins, buttons and rings for fortune telling.

During the first two days of November, Mexico and parts of Latin America celebrate Dia de los Muertos, or Day of the Dead, as families and friends remember those who have passed away. It is believed that the souls of people are able to briefly return and reunite with their loved ones. Hot chocolate, tortillas, pan de muerto (bread of the dead) and other food is left as an offering at in-home altars or other sacred places.

Also colloquially known as All Saints’ Day, Ognissanti is a national holiday celebrated in Italy on the first of November. The festivities, which usually begin before the official date, remember saints and other loved ones who have died. Fresh flowers are left on the graves of the honored souls, red candles are placed in windows at sunset and a place setting is left on tables inside homes in case a spirit visits.

During the second Paksha of the Hindu lunar month, people in India celebrate Pitru Paksha, a time period during which the souls of the dead are allowed to return to Earth and visit their families. During this celebration, families offer the dead a variety of different foods. Kheer, sweet rice and milk, and Lapsi, a sweet porridge, are two of the most common foods. The food is cooked in silver or copper pots and served on banana leaves.

The Awuru Odo Festival marks the bi-yearly return of the Odo, deceased friends and family who briefly return to the living to visit their loved ones. The holiday can last up to six months, and preparations to greet the Odo are very elaborate. The spirits are expected to arrive between September or November and depart in April. The Festival itself is celebrated with feasts, music and a final performance featuring handcrafted masks.