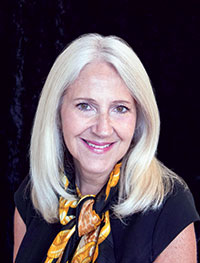 Following a car accident caused by a drunk driver that nearly took the lives of Jackson and her husband, she reflects on the outpouring support from the Virginia Wesleyan community in an open letter.

I remember hearing the deadening thud, followed by feeling as though every bone in my body had shattered. On the evening of Feb. 7, my husband Joe and I were in the second car stopped at a light at the intersection of Northampton Boulevard and Pleasure House Road. We were on our way home from a fundraising concert at Old Dominion University, when a 2005 Subaru Legacy going 60 miles per hour, driven by a drunk driver trying to outrun police, plowed into the back of our Toyota Camry, propelling us into the Dodge Ram in front. The car spun at least twice, the front airbags deployed, and the front windshield cracked. I knew I was hurt, and gasped to my husband, “Am I dying?” He grasped my hand and said that help was coming. A police officer, his head cocked, appeared in the driver-side window and asked, “Are you OK?” Joe, always one for understatement, murmured, “We’ve been better.”

At that point, everything became a blur. I repeated the words, “Help me, please help me,” perhaps channeling my hero Mister Rogers, whose mother gave him this advice: in times of trouble, look for the helpers. Seeking helpers became my mantra, but I had no idea then how many there would be. Joe, who was in the driver’s seat, told the EMT workers to get me out first because I was worse off, but they said they had to remove him before they could move me. They then slid me onto a board and into an ambulance. The last words I heard were the EMT workers saying that the zipper on my beautiful, new, black, North Face fur-hooded winter coat was stuck, and the coat would have to be cut off. Little did I know then, that the coat could have contributed to saving my life.

I recall nothing until four days later when I awoke in the Intensive Care Unit to my son Nick chanting, “The Ethics Bowl team won!” I felt fortunate to be alive and great pride in the team I coached, just back from their 2-day competition in Lynchburg. The details would come later.

I learned that I arrived at the Sentara Virginia Beach General Hospital Emergency Room in critical condition. The force of the impact had detached my diaphragm and thrust all of my organs into my chest. God was with me, as accomplished trauma surgeon Dr. Joseph P. McDermott was on call. He worked all night to realign and reattach my organs. I also had a broken femur (requiring surgery) and a cracked sternum and lower lumbar vertebrae. The attending pulmonologist placed me on a respirator, and I remained unconscious in the ICU for four days, followed by two days of hallucinations caused by the powerful painkillers in my system. Meanwhile, my family and colleagues at Virginia Wesleyan rallied around me. My husband Joe, who had broken a leg, arm, and four ribs, and sustained a black eye, managed at 1:30 a.m. to reach our son Nick in Chicago, and he and his wife Lucie got the first flight out to Norfolk. Joe also got hold of Linda Ferguson at 3 a.m., and she drove from Suffolk to Virginia Beach to let our dog Rosebud out, contact administration at Virginia Wesleyan to ensure someone could accompany the Ethics Bowl team to Lynchburg Sunday for its meet, and pick up Nick and Lucie at the airport. Although I have no recollection, I am told that while I was heavily sedated with a tube down my throat, my family and fellow professors held my hand, prayed, and assured me. This transcends any job description. This story has a happy ending. I regained consciousness on Tuesday, the day after the Ethics Bowl, and along with Joe, am on the road to recovery. We are now in the Rehabilitation Unit at Sentara Virginia Beach General Hospital. Each day gets a bit better.

I may be a medical miracle, but the true magic of this story is you: the faculty, staff, students, administrators, and alumni of Virginia Wesleyan, who did more to heal me than you will ever know; for this I thank you. Institutional slogans come and go, but when I arrived at Virginia Wesleyan in 1984, we touted the school as “someplace special.” It was hokey, to be sure, but we believed it. At Wesleyan, you weren’t directed to an office to solve a problem but to a person who would help you. Over the past couple of weeks, so many of you have helped me. I have found comfort in your many acts of kindness. Joe’s and my rooms filled with flowers, balloons, cards, books, and small gifts. On Valentine’s Day Sally Shedd brought me a box of get well cards and Valentines and said, “It’s stuffed. You couldn’t fit a single one more in here.” I was touched by notes and cards from every swath of campus, including everyone I know and many I didn’t. If I had one student on a sports team, the whole team signed the card, likewise with fraternities and sororities. Some students wrote, “I never had you for a class, but I heard good things about you and hope you get well.” Communication majors and Batten Honors College students were especially well represented, showering me with good wishes.

My dear colleagues shared with me bits of themselves. Terry Lindvall made jokes. Retired music professor Lee Jordan-Anders offered a spry musical compilation. Chaplain Greg West sent inspiring scripture. Sharon Swift created colorful get well cards with big hearts on handmade paper and sent me a photo of the tree outside my office in full, glorious bloom. Katrina Henry wrote a long, thoughtful response to address the questions I had regarding the physics of my accident, including if my beloved North Face coat protected me upon impact — the answer was probably yes. Lisa Lyon Payne was a godsend to my son as she helped him organize what he needed to do.

Colleagues took care to choose books and magazines they knew we would love. Josh Weinstein gave Joe a book on environmental literature, Sally Shedd presented me with a book on Mister Rogers, and former Provost Tim O’Rourke delivered a twenty-first century appraisal of his and my hometown, Pittsburgh. Finally, Steven Emmanuel gave Joe and me books of philosophy by Marcus Aurelius and Kierkegaard respectively, that speak to our current state of mind.

Some acts of kindness I will never forget, such as former President Billy Greer and his wife Fann visiting with two heart-shaped cherry tarts on Valentine’s Day and Martha Jo-Wilson (as in the Wilson Arboretum), wife of our former dean, offering encouragement and advice. She should know: on Christmas Day 1995 she too was in a serious auto accident that claimed the lives of her husband and mother and left her badly injured.

Generations of those with Virginia Wesleyan connections have reached out to Joe and me, and that has made all the difference. All told, hundreds of representatives of the Virginia Wesleyan family have stopped by, called, sent messages or texts, or written letters and I have never felt more loved or supported than I have over these past few weeks. It is hard to feel angry or bitter about being the victim of a drunk driver when surrounded by such goodness.  You have shown that we are a community and that we take care of one another. We talk a lot today about leadership, but I believe that every person has the capacity for inner strength, resilience, understanding and illumination, as well as the potential to influence and inspire others. We are best and most empowered when we work together toward a common goal, pooling our talents, showing how those dedicated to the study of the liberal arts make sense of the world, its patterns and randomness, and foster healing and insight to those struggling.

The silver bowl that the Ethics Bowl team members brought back to campus from Lynchburg symbolizes not only their statewide victory but, more importantly, our institution’s willingness to engage with hard questions, do the right thing, and treat each individual with dignity and respect. I feel privileged to be a part of this community and ask you to join President Miller, the faculty, staff, students, and alumni of Virginia Wesleyan as we celebrate our long legacy of a culture of caring.