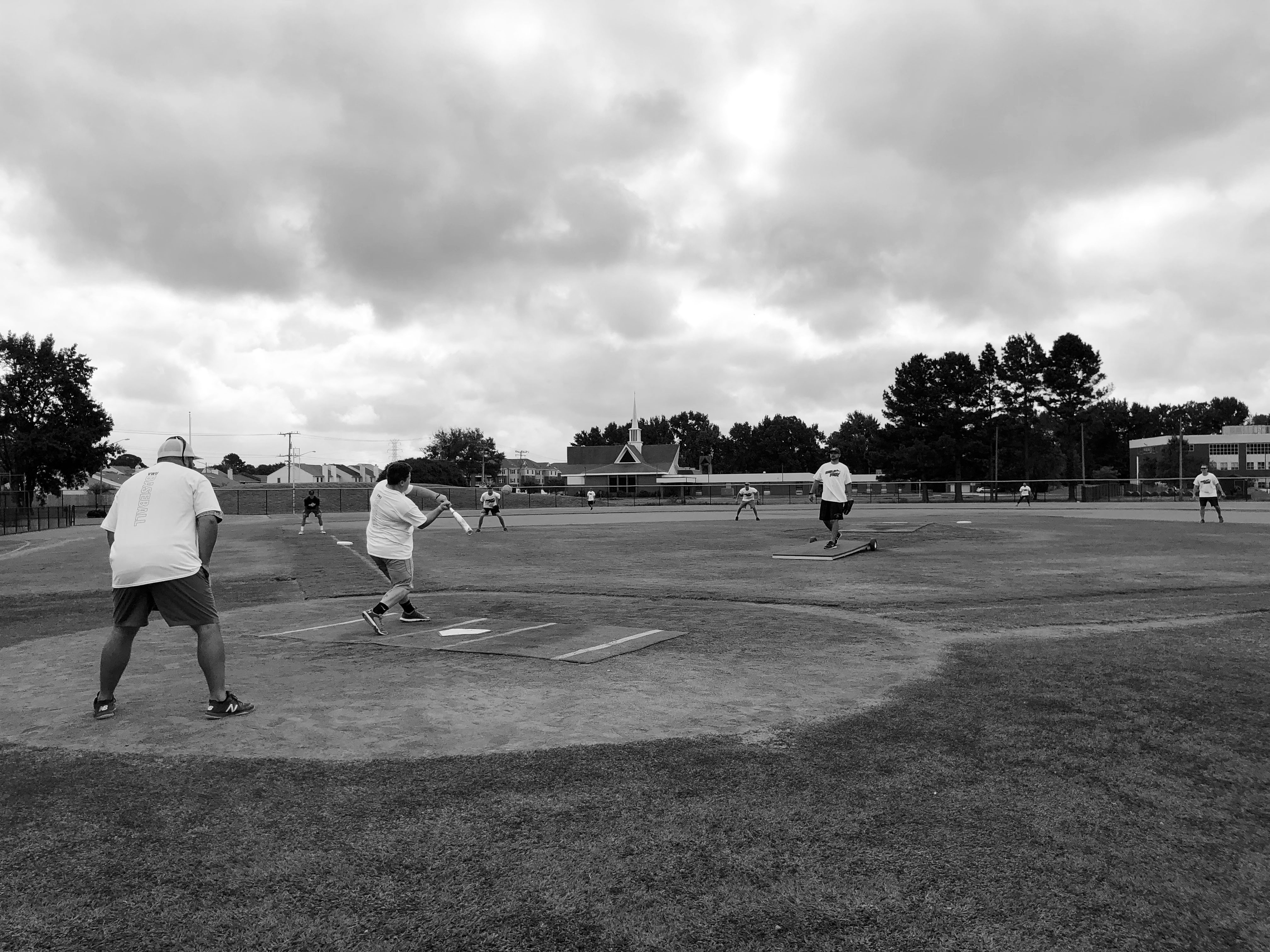 Alumni weekend is always a time to catch up with old friends and professors, but it is also a time for former student-athletes to see their old teammates and coaches. For roughly 40 alumni, the first annual baseball and softball slow pitch softball game was the perfect opportunity to do both.

The score did not matter, but it was the laughs, memories and story telling that highlighted the morning. The game got started as one of the most accomplished softball alumna, Cassetty Howerin, stepped in the box and ripped a single right up the middle off of Erik Nguyen, one of the most dominant relief pitchers for Virginia Wesleyan baseball.

“Erik was a stud for us when he was here, he was one of the most reliable pitchers I have had the pleasure to work with in my coaching career…he was hit harder during the softball game than his entire career,” joked Coach Francis.“All jokes aside, it was just a really great day for everyone involved, it’s always great to see old faces on campus and check in with them and their families.”

The game was played on Perry Field as the new softball stadium, Tom and Betty Broyles Field at TowneBank Park, is currently being constructed. The softball alumni will not get to compete on the new field, but they did create the foundation of success, along with head coach Brandon Elliott.

Coming off of back-to-back National Championships, the softball program has always had the talent, but now they will have a brand new field to compliment the product displayed on the field.

“Even though I won’t be playing on that field, my hard work and dedication throughout my career helped make it happen. I could not be more happy for the program and I can’t wait to come out and support the team this spring,” said 2016 graduate Kiersten Richardson.

After the game concluded, the group moved over to the Fin Fest hosted on the lawn in front of the Trinder Center. It was at the Fin Fest where the group really reconnected.

“Fin Fest was a great event put on by the school, it allowed all of us to come together, take pictures and reminisce on our time together, just smiles and laughs all around,” Francis said.

Amongst the baseball alumni were players from 2003-07, when Coach Francis was an assistant coach, and also the most recent alumni, when Francis returned to Virginia Beach in 2015 as the head coach. The 2003-2007 alumni were apart of the pinnacle of Virginia Wesleyan baseball as the team captured three ODAC Championships along with three NCAA Regional appearances. Francis was part of that success and brought VWU back to a NCAA Regional in 2018 for the first time since the 2006 squad.

The 2018 team was able to make program history in the regional as they won three games before losing to Misericordia. The team finished the year 31-16, marking the first 30 win season since 2004.

The baseball and softball teams also teamed up with the men’s lacrosse team for their annual alumni/friends of the program golf tournament at Cypress Point Country Club. The 17th annual tournament brought in 192 golfers to support the Marlin athletics teams.

The success and possibilities that all Marlin teams have are made possible by alumni who support their former programs, which all current players and coaches appreciate. The Marlins are already prepping for their 2019 campaigns and look to bring continued success back to Virginia Beach.