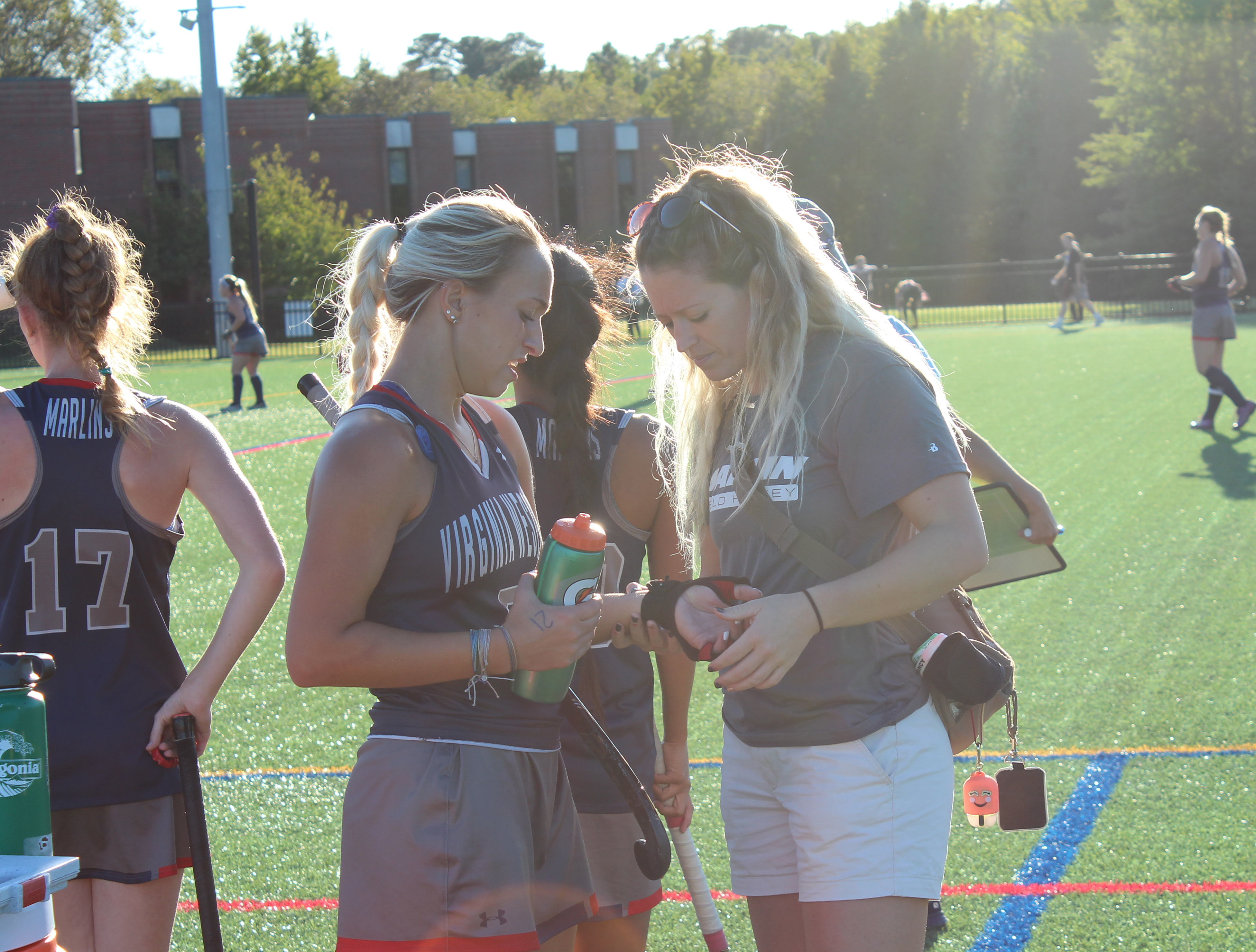 Meet the athletic trainers responsible for the health of VWU athletes.

When fans flock to various locations around campus to watch Virginia Wesleyan Athletics in action, most just pay attention to what is going on with the game, but do not think of all the work that takes place behind the scenes for those athletes to be performing at the level they do. Whether it is practice, a game, or the offseason, one place and four people remain constants in the lives of an athlete at Virginia Wesleyan: Corey Wingen, Nicole Curry, Jess Young, and Abrianna D’Onofrio occupy the Athletic Training Facility (ATF) and serve the campus as the athletic trainers for all Marlin athletes.

Associate Athletic Director for Sports Medicine Corey Wingen is entering his second full year in charge at Virginia Wesleyan after spending previous years at Christopher Newport University. Wingen came to VWU in the fall of 2015 after the previous Head Athletic Trainer left to pursue another opportunity. Coming into a new facility without having any time to prepare for how things were done here made it difficult, but Wingen managed to adapt while making his own mark at VWU.

“When I first got here to Virginia Wesleyan, I made it a point to sit back and see how things operated on a day-to-day basis. I felt that it was very important to understand the specific nuances of the athletic department and identify the biggest needs of the student athletes here. We have streamlined and simplified the overall operation of the athletic training facility which allows for us to provide treatment effectively to all our student athletes. The athletic training room has been re-organized to put equipment in places that allow for the most efficient operation and we have also done functional/cosmetic upgrades to treatment tables as well as having the facility repainted. I make it a point to replace or upgrade something within the facility each year so that there is never any issue with us not having all the equipment we need functioning properly,” Wingen said.

In years past, there have been two full time athletic trainers and two graduate assistants from Old Dominion University, but with a new partnership with Sentara Health and a Master’s degree requirement, changes are coming to how the ATF operates. Abrianna D’Onofrio will be the last Graduate Assistant from ODU. Although only entering her second year, D’Onofrio has had quite the experience here at Virginia Wesleyan as she pursues her Master’s degree at ODU.

“My first year was a bit of a whirlwind. Getting the opportunity to be a part of the team [softball] during their run to a National Championship was an amazing experience and I can’t think of a more deserving group of individuals to experience it with. This group truly embodied the idea to #outlove. I never would have thought that I would get to be part of a teams first National Championship, especially not during my first year. The girls will tell you that I’m not lying when I say I cried [from happiness] multiple times watching them play. As an athletic trainer, we become very close with our patients. They tell us everything from when Coach made them mad, to how their doing in school or to the fight they just had with their significant other. We know their dreams and their biggest fears. And to see my girls accomplish some of their biggest dreams makes me so incredibly happy. It was wicked awesome,”  D’Onofrio said.

Nicole Curry originally came to Virginia Wesleyan in the fall of 2015 as a graduate assistant from ODU, but was hired at a full time basis through Sentara as an athletic trainer at VWU after graduating from ODU last May.

Students were very pleased with seeing Nicole’s face back on campus as she works very closely with the women’s soccer team and the baseball team.

“Having Nicole back is awesome because she is a trusted face and always welcoming to any athlete that needs care,” sophomore Jimmy Ziemke said.

Nicole echoed the same message about building a relationship with the student-athletes when asked about the best part about her job.

The key to a successful ATF is the continuity and communication between the athletic trainers and the student athletes, and that is exactly what is being built under Wingen.

“The four athletic trainers that we have on staff work well together on scheduling practice and game coverage so that we are not overwhelmed. This is especially important during the fall/winter overlap season and winter/spring overlap season that we have strong communication between the staff so we are all having time off and practices and games are being covered,” Curry said.

Although each athletic trainer has the own sport that they cover, any one of the four is always willing to help out any student athlete that comes in for assistance as each of member of the ATF as their own specialty. Students are always encouraged to stop in the ATF even when they have a common cold so the athlete, athletic trainers, and coaches are always on the same page.

The four minds in the ATF come together to successful tend to any athletes need.

“It’s a really great group because we all have different areas of care we excel in. I am particularly good with the spine, Nicole is really good with the shoulder and elbow, Jess is more our chronic injury person and Corey is our go to person for any head injury and all the paperwork/behind the scenes stuff we do,” D’Onofrio noted.

Athletic trainer Jessica Young is in her second year at VWU and has already noticed the improvement of the training staff and program under Wignen compared to previous experiences she has had at other schools, but still realizes there is a struggle with only three full time athletic trainers to cover all athletic activities.

“There is always a struggle in athletic training with staff shortage and long days in order to cover all functions. Our partnership with Sentera has allowed us a new path of hiring more staff members to make ends meet. Our partnership with Virginia Institute of Sports Medicine has opened so many doors to us and has allowed us to get our athletes seeing fantastic physicians quickly. It is amazing that we can get our athletes into surgery within days,” Young said.

The boost that the Athletic Training staff has brought to VWU will only help the Marlin coaches with their current team and in the recruiting process as the amenities offered continue to grow.

The environment that Corey and his staff have created in such a short period of time has made the Athletic Training Facility a place where student-athletes feel comfortable and enjoy themselves even when dealing with an injury, which can be some of the toughest times for an athlete. The staff is always open to hang out with and just have a conversation about whatever is happening in the world, as long as the facility is not busy.