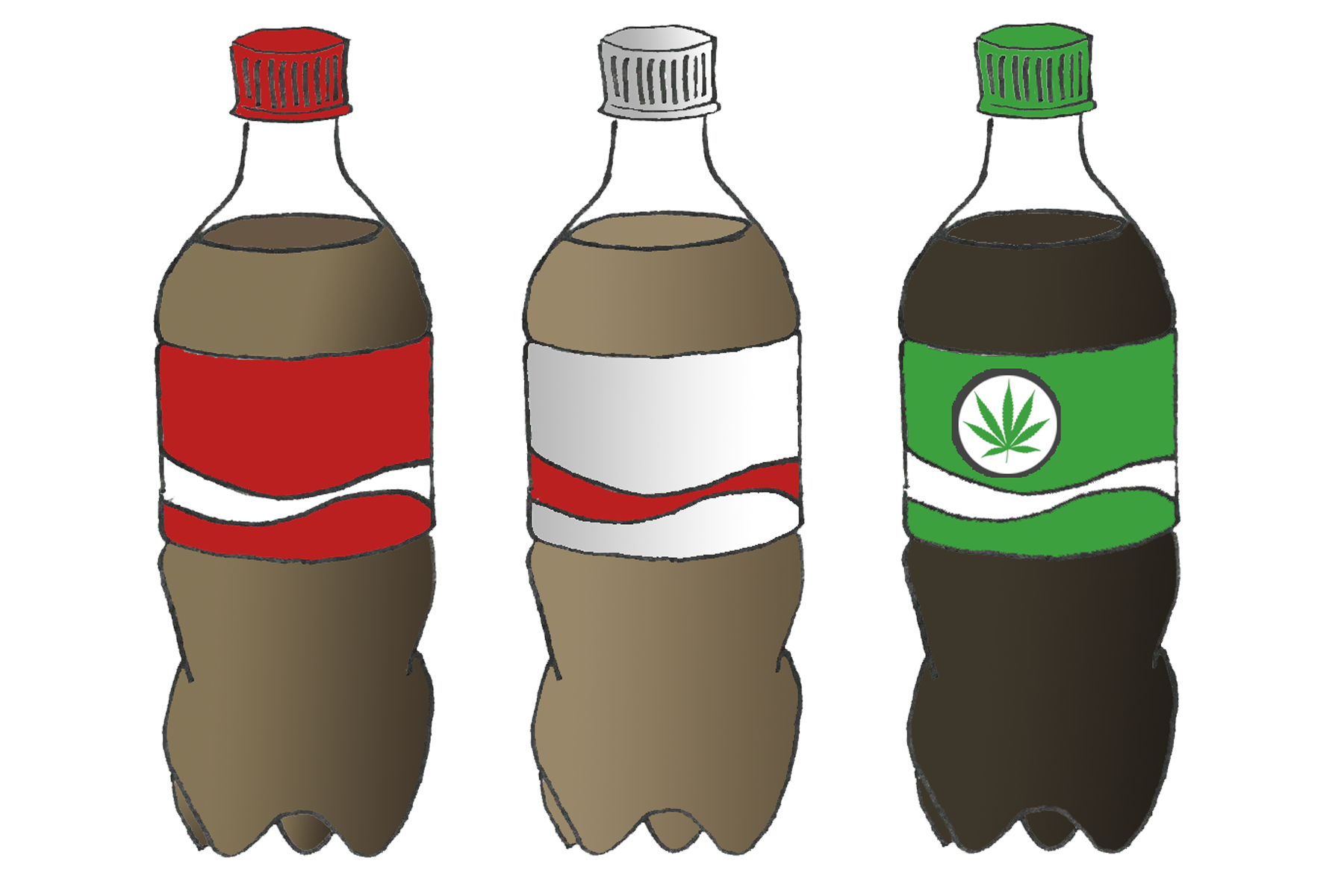 When the new Coca-Cola Georgia Peach and California Raspberry soda flavors hit shelves in March, they may have a third contender to watch out for in the future: cannabis. Reports have surfaced that Coca-Cola has been eyeing the rising cannabis industry in America to work on a collaboration.

Cannabidiol, or CBD oil, is a legal hemp-derived oil that does not contain THC, which is the psychoactive drug found in marijuana. Instead, CBD oil is the part in marijuana where doctors have been finding many health benefits, such as natural pain relief and anti-inflammatory properties. While many of these symptoms can be cured by over-the-counter medications, other people have been turning to CBD oil for a natural alternative.

Although CBD oil has various health benefits, there is still a stigma associated with it because of its association with marijuana.

“We have no interest in marijuana or cannabis. Along with many others in the beverage industry, we are closely watching the growth of non-psychoactive CBD as an ingredient in functional wellness beverages around the world. The space is evolving quickly. No decisions have been made at this time,” the Coca-Cola company stated in mid-September.

Even with cannabidiol’s natural health benefits, its recreational use within the United States is still limited, which could pose an obstacle for Coca-Cola as it works to introduce it into its soft drinks.

“Coca-Cola did start with cocaine in its drinks, so it would make sense for them to go back to a new, healthier drug being introduced,” junior Jenny Evans said, referencing the company’s past use of ecognine, an alkaloid in cocoa leaf that can be synthesized to produce cocaine.

“It might help people relax, but I don’t know if caffeine and CBD oil is the best combination,” Evans said.

Adjunct faculty professor Benson Fraser said that he hadn’t ever used the oil himself, but that he also wasn’t opposed to it. “What they do in their home on their off-time, as long as they’re good citizens and not disruptive to the culture, I’m fine with that. And if they want to drink Coke with cannabis in it, if they’re not hurting anyone and it doesn’t have the psychoactive part, then I’m fine with it,” Fraser said. He added that he would also be fine with the psychoactive part “if that’s what they really want and it somehow helps.”

“If it heals pain, then I definitely think it will be beneficial,” freshman Jessie Dail said, but he also questioned whether enough studies have been done on CBD oil.

While clinical studies have been done on CBD oil and its effects, it is still a product that will need to undergo significant research and study to understand its true benefits and drawbacks.

People naturally produce certain endocannabinoids, often referred to just as cannabinoids, as part of the body’s effort to stay healthy and promote homeostasis. Cannabinoids have two main receptors, CB1 and CB2. CB1 receptors are present throughout the body, though many are located in the brain. These receptors help control coordination, movement, pain and appetite, among other functions. When introduced into the body, THC attaches to these receptors.

CB2 receptors are more commonly found in the immune system, and help with inflammation and pain. Originally, researchers believed that CBD attached to CB2 receptors, according to Jon Johnson of Medical News Today.

However, new studies have challenged this belief. “It now appears that CBD does not attach directly to either receptor. Instead, it seems to direct the body to use more of its own cannabinoids,” Johnson said.

There are claims that Coca-Cola and other soda companies’ recent interest in the marijuana industry are due in part to the declining sales of soda, as a growing number of Americans choose to go without soft drinks. Soda sales fell in 2006 for the first time in twenty years in the U.S. and have continued to fall every year since, according to Beverage Digest. As the soda industry fights to stay relevant, companies have been looking for healthier and alternative drinking options.

Among eyeing the rising cannabis industry for a collaboration, Coca-Cola has been expanding into other markets. In a more recent round of acquisitions, Coca-Cola landed the Australian kombucha maker Organic & Raw Trading Co., the sparkling-water brand Topo Chico and coconut-water brand Zico.

Though Coca-Cola is on the brink of a collaboration to help boost sales, it seems Pepsi has already begun making contacts in the cannabis and CBD-oil markets.

Additionally, the possibility of a CBD-oil infused Gatorade for chronic pain would further open markets. Gatorade already boasts a drank that replenishes, but a drink that heals may be more valuable.

PepsiCo. began transitioning to a healthier market years ago, by acquiring brands like the German dairy company Theo Muller Group and low-calorie soft drink brand Izze. During an earnings call in 2016, PepsiCo CEO Indra Nooyi said this was an example of “future-proofing [Pepsi’s] portfolio,” and marked a shift in the company’s focus to “capitalize on consumers’ increasing interest in health and wellness.”

But even with the available research and the popularity of both soda giants, the issue may be moot for Virginia residents. Marijuana and other cannabis-related products are still illegal in Virginia, for both recreational and general medical use.

CBD oil has only recently been allowed on a limited medical basis. The healthcare bills HB1251 and SB726 allow people with intractable epilepsy and other qualifying, diagnosed medical conditions to use medicinal cannabis oil. This new legislation provides an affirmative defense for patients, meaning the legal consequences may not apply in certain circumstances, but does not make general possession of marijuana or other cannabis-related products legal. In order to use CBD oil, you must be registered with the state and provide a written certification issued by a doctor. If Coca-Cola does create a CBD oil-infused drink, it is unlikely to be on the shelves in Virginia until state laws allow recreational use of CBD oil.