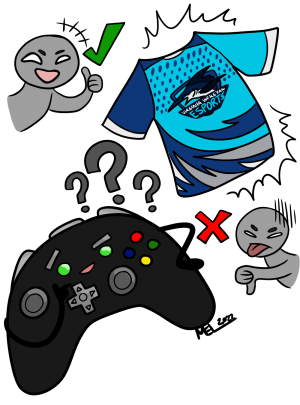 In these changing times, Esports is indeed a sport that is competing to be the future of sports.

As Esports continues to grow in popularity around the world, they are met with

Many like to point out that since no athletic abilities are required to play Esports, it cannot be called a sport.

It’s true, Esports do not require athletic ability. However, technically, neither do sports in general.

skill in which an individual or team competes against another or others for entertainment.” Esports, while they do not require athletics, still do require physical exertion and teamwork, and therefore should be regarded as a sport.

So, what physical exertion is required of Esports players?

There are a plethora of examples that could be provided, but the most significant one that should be mentioned is the practice required to hone one’s mechanical skills and reaction time.

Esports players, like many traditional athletes, must also set time aside to practice their skills for their respective games.

An article from Business Insider concerning Esports training regimens claims, “Only a select few can handle the pro-level regimen required to gain the extensive game knowledge and elite mechanical skills and reflexes to compete.”

As the article mentions, Esports requires a certain level of mechanical skill to compete properly.

For players on Personal Computers (PCs), a fine-tuned muscle memory is required to use a keyboard so that a game’s mechanics are fully made use of.

If a game happens to be a First Person Shooter (FPS), the expert use of a mouse becomes a critical part of gameplay, as the mouse controls where the player is looking.

These games also require precise aim to eliminate opponents, so much time and practice is necessary to have such aim.

To add another layer to mouse and keyboard gameplay, a player’s reaction time and environmental awareness, just as in conventional sports, is critical, as your ability to react quickly can mean victory or defeat for you and your team.

All these mechanics combined surely makes Esports just as challenging of an experience as any other conventional sport and also demands of players sufficient physical exertion.

So, Esports does indeed require physical exertion, but do they also require an individual or a team effort?

While many casual video game players will often play by themselves or with a few friends, Esports players are often associated with a team.

For example, VWU Esports currently has four teams, ranging from MOBA to FPS games, who meet each week to practice not only their skills but also their teamwork.

The teams and the individuals within them are what Esports is really about.

Sure, the competitions play a large role.

However, there is something to be said about how solid team chemistry really brings life to a sport and its gameplay.

So, to conclude, Esports is, undeniably, a sport.

No, they do not have athletics.

No, Esports players are not athletes.

However, if Esports does require significant time and practice to grasp complicated mechanics and are also built on a solid foundation of teamwork and personality, then they surely fulfill the criteria proposed in Oxford’s definition of sports.

While maybe not the most significant current issue, the acceptance, integration and understanding of Esports is extremely important going forward, as it opens a new arena for the next generation of players. Esports is the sport of the future.

While Esports may fit into the Oxford definition of sports, one has to recognize the cultural aspect of sports as well as the overarching negative effects of Esports.

Sports have always been a mode of gathering and socializing.

Whether you’re physically playing the sport or spectating, it is undeniably a social experience.

However, as Esports are played primarily on computers or through other gaming consoles, that key aspect of socialization is lost.

Sure, you can join parties or chats and talk shallowly about the tasks ahead of you in the game, but it is exceedingly difficult to build those relationships and deep connections when the only words being used are directed towards the game and are often vulgar in nature.

The lack of direct social interaction can also have a lot more negative effects mentally.

You can see the negative effects of limited social interaction from online schooling during the COVID-19 pandemic.

A study by the National Library of Medicine showed that “71% of student participants indicated they had increased levels of stress, depressive thoughts, and anxiety” due to the quarantine brought about by the COVID-19 pandemic.

So if sitting alone in front of a computer for long periods of time affects people that horribly, why should Esports be advocated for?

Regular sports can be a method of mental joy for so many people.

Studies also show that physical exercise can be good for mental health as it releases endorphins, the happy hormone.

How could Esports be the future if it ultimately has a much more negative effect on a person’s mental wellbeing when compared to physical sports?

Not only is mental well-being incredibly important, but so is physical health.

This is why sports like football take the dangers of tackling away from children and make “touch football” the norm.

Other children’s sports typically don’t have much danger as they’re much slower paced and less aggressive than at the professional level.

ESports, however, are damaging youth slowly but surely. “Our study has shown the negative impact that playing computer games and using mobile phones can have on the joints of young children, raising concerns about the health impact of modern technology later in life,” said Professor Yusuf Yazici of New York University Hospital for Joint Diseases in a TIME article.

Sure accidents happen during regular sports for youth, but on the whole there are no long-lasting life effects from playing sports as a child; Esports, on the other hand, has long lasting, irreparable effects.

To take the health effects of sports vs Esports out of the equation, Esports cannot be considered a sport in their current form simply due to a lack of lifespan and cultural influence.

Physical sports are indoctrinated culturally in practically every nation around the world.

Here in the U.S., sports like football and baseball play a huge role in our everyday lives.

We create our whole schedules around game times, we spend copious amounts of money purchasing our favorite sports team’s gear as well as tickets to watch them.

We see the World Cup going on right now in Qatar.

Most of the world has interrupted their lives just to watch their country play a soccer match.

The practical definition of a sport may fit Esports, but the integration on the cultural level of physical sports and the hold it has on society cannot be ignored.

This is the gap that Esports has not crossed yet. Esports does not affect whole societies in the way that physical sports do, and until it does, Esports will not be considered a sport by most of the world.

In conclusion, the mental detriments and the physical harm to our youth showcase that Esports implies a damaging future.

Culturally, Esports is simply not seen as a sport and most likely will not be for a long time.

The future is not bright when it comes to Esports and the world will continue to cast it aside.