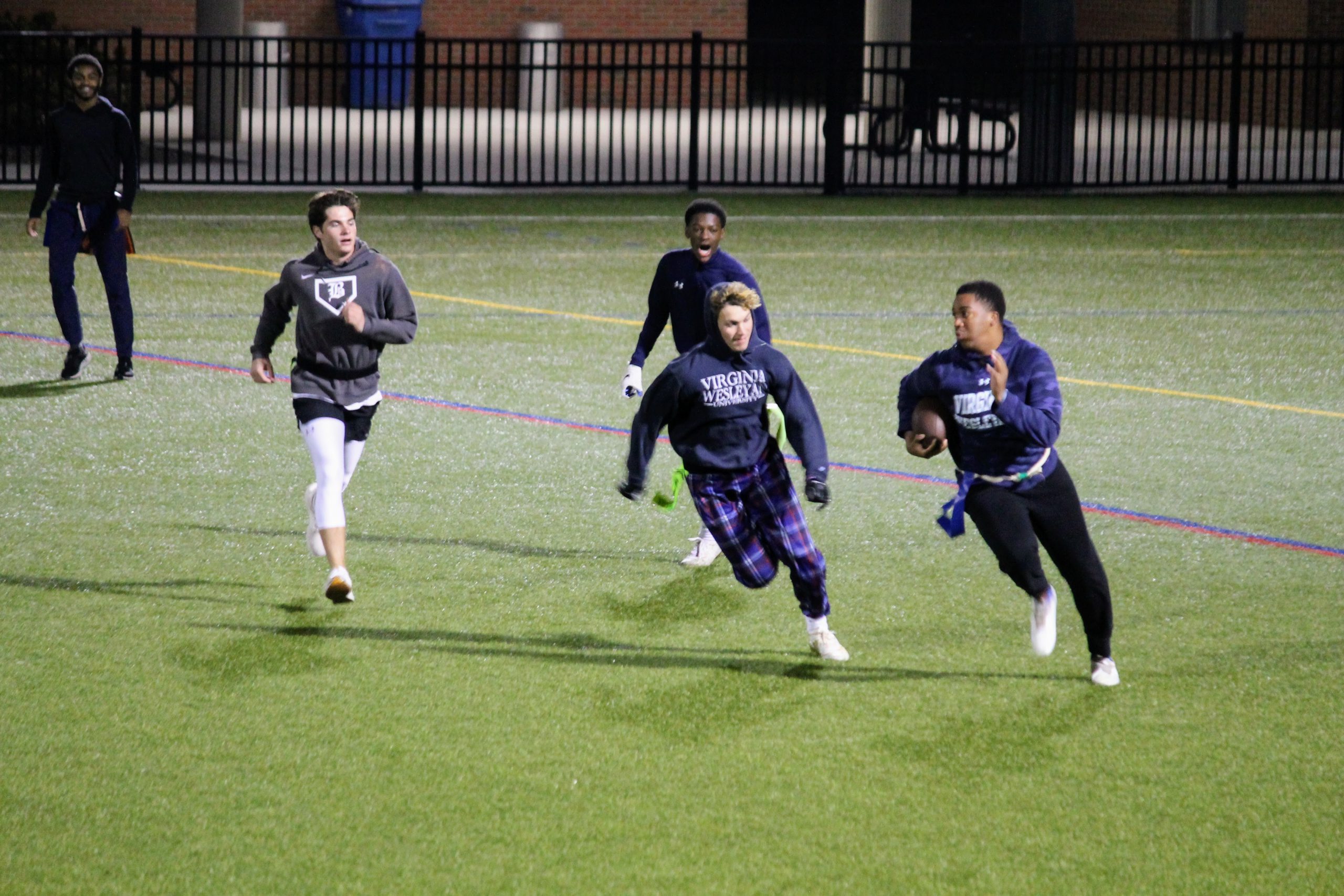 Featured Image: Teams compete on Birdsong Field in everything from cleats to pajamas. Ross Winner|Marlin Chronicle

As fall sports enter competition seasons, the flag football teams gather under UREC management to compete in their own tournament of games. For five weeks, on Tuesdays and Thursdays, Birdsong Field came alive with music and rowdy teams.

Hollyn Pleasants, a sophomore and Batten supervisor, attended each game to oversee the field. “There were 8 teams in total participating,” Pleasants said.

Along with the teams, spectators were allowed on the sidelines to support their friends. “The amount of spectators varied but usually people would come to watch a specific game and then leave, so there was hardly ever a high number of spectators present,” Pleasants said.

The downside, for Pleasants, was the poor weather conditions. “The worst part was definitely the cold, especially during the one game where we had the hurricane winds,” Pleasants said.

Marranda Hansford, a junior who coordinates UREC tournaments, was pleased with the season and hopes it continues to grow. “More competition would be nice,” Hansford said. “For next year’s season, I would love to see more teams involved!”

This season of flag football saw growth on social media. “A few of this year’s teams also made instagram accounts just for their flag football team,” Hansford said. According to Hansford, the teams would “make ‘game day’ edits of their players and post whether they won or not.”

The energy was helped by the continuing team rivalries. “The team rivals brought so much more energy to the field! For instance, HeadUp Prep, this year’s champions, and To Da ‘Partments have a rivalry because they were both in the finals last year,” Hansford said.

“HeadUp Preparatory were our returning champs from last year, and they definitely defended their crown well throughout the season and especially in the last game where they beat White Men Can Jump by almost double their score!” Pleasants said.

Josh Heller, a senior, has been playing flag football at VWU for three years. “HeadUp Prep, the basketball team, was ridiculously skilled and they were a tough team to face,” Heller said. Heller was on the field with the Drake Carried team.

Heller spoke on the skill level of this year’s teams. “My team, Drake Carried, had a lot of talent on offense, we fell short of the race,” he said. Heller was also complementary in regards to the other teams. “Props to the track, lax, both baseball teams,” Heller said. “They have a lot of skill and were extremely hard to cover defensively, which was something my team struggled with.”

Flag football will return next fall for rematches and new teams. “The best parts were definitely seeing the players have fun and play great competitive games,” Pleasants said.

Heller, who will graduate in the spring, said he will miss playing flag football. “I will miss Tuesday and Thursday nights in the lights,” Heller said.