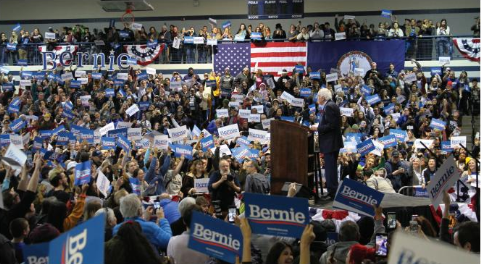 Vermont Senator and Presidential hopeful Bernie Sanders held a political rally on Virginia Wesleyan’s campus on Saturday, Feb. 29. The rally was held at the Convocation Hall in Batten Student Center.  The event was open to the public and welcomed an official count of 3,501 people in attendance.

Outside the rally, invited guest Kevin F, a software developer in Virginia Beach, noted his excitement for the rally. “It’s a movement,” Kevin said. “He’s actually listening to what the people want, ya know, and not just what’s gonna make him electable.”

The doors, which opened to the public at 6:30 p.m., awaited long lines of people who were local or who had traveled far to attend the event.  At one point during the waiting period, the line reportedly stretched from the doors to the Convocation Center all the way to the beginning of the Honors Village.

Several other community members talked to the Marlin Chronicle about what was important to them as they waited in the cold air and filed into the Convocation Hall.

Thomas Johnson, 21, is a Virginia Beach resident. He works as a child-care worker while also studying as an online student at Old Dominion University.  “I’m a Type I diabetic so healthcare is a really big thing for me.”

Looking at climate change,“At the end of the day, we can sit and yell about everything else, but if we can’t breathe and the world’s on fire, everything else is kind of redundant,” Johnson went on.  “Bernie’s the only one really taking a strong stance on those.”

Another young supporter, Annalise, 20, from New York, is a student at Tidewater Community College.  “I had a classmate who would always talk about him, and I never really knew much about him… I decided to look him up… and I’ve been just following him ever since.”

There were a lot issues important to her. “Free healthcare. Minimum wage to fifteen. Gun reform.” These were all talking points she expected Bernie to bring up in his speech.

As the doors opened, thousands of patrons made their way to the Convocation Hall.  The rally was officially set to kick off at 8 p.m. The start time delayed as people filed in, and as Sanders prepared for his third rally of the day, having had two earlier in Boston, Mass. and Springfield, VA.

At the time of Sanders’ appearance, he was the clear frontrunner for the Democratic Presidential primaries.  On election day this November, the American people will decide between a new administration under the Democratic nominee or four more years of Donald Trump.

Sanders hopes to be not just the nominee, but the next president.  Sanders is a social democrat, running on platforms of progressivism and working class populism.  These ideas are clear to see in his rhetoric, which was on full-display during the rally, once he stepped out on stage at about 8:28 p.m.

Sanders also targeted big pharmaceutical companies and insurance companies.  “The insurance companies are getting just a little bit nervous,” Sanders said, “because we are going to end the absurdity of the United States being the only major country on earth not to guarantee health care to all people”.

Sanders touched on care for veterans, an issue close to the heart of a Virginia Beach/Norfolk community with such a large military presence.  “They come home, sometimes injured in body, sometimes injured in spirit, we have forgotten about them,” Sanders described. “Our administration will never forget the veterans, and our administration will never put the men and women in the armed forces in wars that should not be fought.”

The crowd exploded in applause for key issues of gun laws, climate change initiatives, college debt solutions, and the legalization of marijuana.

Other important topics also included police brutality, immigration and prison reform, acknowledging the effects these policies would have on minority populations.  One final area that was anticipated by many was education reform.

Jo Prendergast, a teacher in Virginia Beach, noted her eagerness to hear about Bernie’s education platform.  “I’m interested in what we’re doing with special education for example, and Title I and fully funding our schools, especially our inner-city schools,” Prendergast said.  “As a teacher, I see the daily struggles.”

In total, Bernie spoke for almost an hour, addressing a broad number of topics.  People shouted and waved their signs with every new idea.

“Out of all the candidates, Bernie’s the only one who really gives me hope for any meaningful change,” Kevin added.

Bernie closed the speech reminding the crowd to get out and vote.  Even as the rally’s time waned, the energy in the building remained.

“We are more than a campaign, we are a movement,” Sanders said. When the crowd broke into “Bernie!” chants, Sanders offered an alternative to center the discussion around the movement. “Let me interrupt you and suggest it is not ‘Bernie’, it is ‘us’.”