Pamphlets folded to the size of business cards can be found in many buildings on campus explaining this process further. The cards are located at the Hofheimer Library’s front desk. Virginia Wesleyan’s Annual Security and Fire Safety Report titled “Safe and Secure” is another resource in regards to campus safety that can be found in the library.

Despite their availability, those resources are often overlooked by students at VWC due to the level of protection provided by security staff. However, no college campus is impervious to the threat of violence.

According to the Washington Post, the email read: “I am here to inform that in the next couple of days I will break into the campus and kill as many people as I can until the police arrives [sic].”

The students from Virginia Tech who received the threat seem to have been chosen at random.

The Virginia Tech police department responded to the threat promptly after it was reported.

Though students and faculty were concerned for their safety, Virginia Tech did not shut down the campus. However, some faculty did cancel afternoon classes for fear of a repeat of history.

In April 2007, Virginia Tech fell victim to what CNN describes as “the deadliest shooting rampage in U.S. history.”

Concerning the tragedy, junior Wynter Bond said, “It’s really concerning because Virginia Tech has come such a long way since that tragedy and now they are being threatened again in such a way that connects everybody.”

The university experienced backlash in the years following the event.

On March 29, 2011, the president of Virginia Tech received a letter from the U.S. Department of Education informing him that the school’s actions in response to the shooting violated multiple security requirements.

According to the Jeanne Clery Disclosure of Campus Security Policy and Campus Crime Statistics Act, colleges and universities are required to disclose campus safety information in a timely manner after it is reported.

“Although the Virginia Tech Policy Group met to plan how to notify the campus community of the dormitory shootings, it did not issue any notification until more than two hours after the shooting occurred,” the U.S. Department of Education said.

In addition to the resources scattered throughout the campus, Virginia Wesleyan has security staff working all day and night to ensure the safety of students and faculty.

With the level of security that Virginia Wesleyan has in place, some students find that it is hard to imagine a similar threat to the one Virginia Tech experienced happening on the college’s grounds. Sophomore Stacie Doughtie has lived on campus for a year and said that she feels safe residing at Virginia Wesleyan.

“I feel like if something like that did happen here, we have procedures that would make it not seem as dangerous as with a larger university” Bond said.

If a student or faculty member were to feel threatened, the security staff has multiple modes of contact listed on Virginia Wesleyan’s website. The page instructs students who feel unsafe to contact security by calling one of several numbers or by visiting the security office in person.

Campus security provides students with the resources to report threats to campus safety but this is only a reactionary measure. For those who are unable to find the print information about the campus community’s role in safety procedures, there is also a link to the safety report below the emergency contacts list on Virginia Wesleyan’s website. 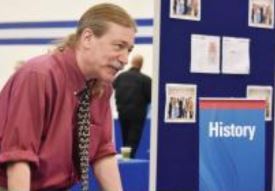