Windy, salty air kicking up sand. Wave after wave lapping at the shore. The neverending clink-clink-clink of a reeling fishing pole. For sophomore Griffin Hollins, this is home— well, kind of.

Hollins, an Earth and Environmental Sciences major here at Virginia Wesleyan University, has been visiting North Carolina’s Hatteras Island with his family since he was a toddler.

“Every year since I was born, I have spent at least one week down in Hatteras,” Hollins said. “There has never been a year that I haven’t gone. It’s like a second home for me.”

Hollins attributes his love for the beach, the ocean and especially fishing to visiting the Island so often as a child.

“If I’m being honest, Hatteras helped shape me into who I am today,” Hollins said. “Because of Hatteras, fishing is a huge part of my life now.”

Hollins’ family and friends can attest to the impact Hatteras has had on Hollins, especially on his love for fishing.

“Griffin has been fishing since he could hold a fishing pole,” Andrea Hollins, Hollins’ mother, said. “Every year we spend our vacations in Hatteras, and he can’t wait to put his toes in the sand and cast out a line.”

As he has gotten older, fishing has become more than just a hobby for Hollins. Every year during April and October, Hollins heads down to Hatteras with his local 4 Plus 4 Wheel Drive Club to compete in the biannual 4 Plus Surf Fishing Tournament. The tournament consists of a weekend-long contest of competing against other fishermen to catch the largest fish. The winner receives a large cash prize, and the runner-ups receive smaller fishing-related prizes.

“I look forward to the fishing tournament every year,” Hollins said. “I just love being around so many other people that love fishing as much as I do, well, almost as much as I do.”

Since the beginning of February, Hollins even began his own fishing YouTube channel: Outcast Fishing. He currently has three videos up and 62 subscribers. His first video, posted Feb. 13, has over 1,000 views.

“I really don’t have any major goals for my channel,” Hollins said. “I just like to share what I enjoy about fishing.”

Hollins discovered the fishing side of YouTube a few years ago, but not until last year did he think it would be feasible to have one of his own. Since then, he has planned, researched and worked up the courage to step out of his comfort zone and start his own channel.

One of Hollins’ best friends from high school, Jason Brooks, could not be more proud of his commitment.

“I am surprised that he is doing this because he has always been a quiet guy and has never really put himself out there,” Brooks said. “For him to find something he loves as much as fishing and to want to share his knowledge and skills with the world is amazing, and I am so proud of him.”

Hollins’ videos take viewers along with him on his best fishing trips, usually on the beach in Hatteras. Primarily focused on saltwater fishing, the videos generally showcase Hollins surf fishing from the shoreline of the Atlantic Ocean, or wading through the calmer waters of the Pamlico Sound.

“I would really like to check out some new fishing spots on the East Coast,” Hollins said, “but, as of right now, I’m happy with just fishing in Hatteras.”

Through his videos, Hollins also shares some important skills, like the basics of knot-tying, setting up a strong rig and throwing out a cast net. In the future, he hopes to create videos that demonstrate the best ways to clean and cook fish as well.

Hollins plans to continue fishing and posting new videos every week. He appreciates the overwhelming amount of support he has received since posting his first video, and he can’t wait to share more with the world.

“I didn’t really have any high expectations when I posted for the first time back in February,” Hollins said. “It’s just so crazy to see how many people actually follow along on my channel and want to see more.”

Check out Hollins’ channel, Outcast Fishing, and become a subscriber to support a fellow Marlin. 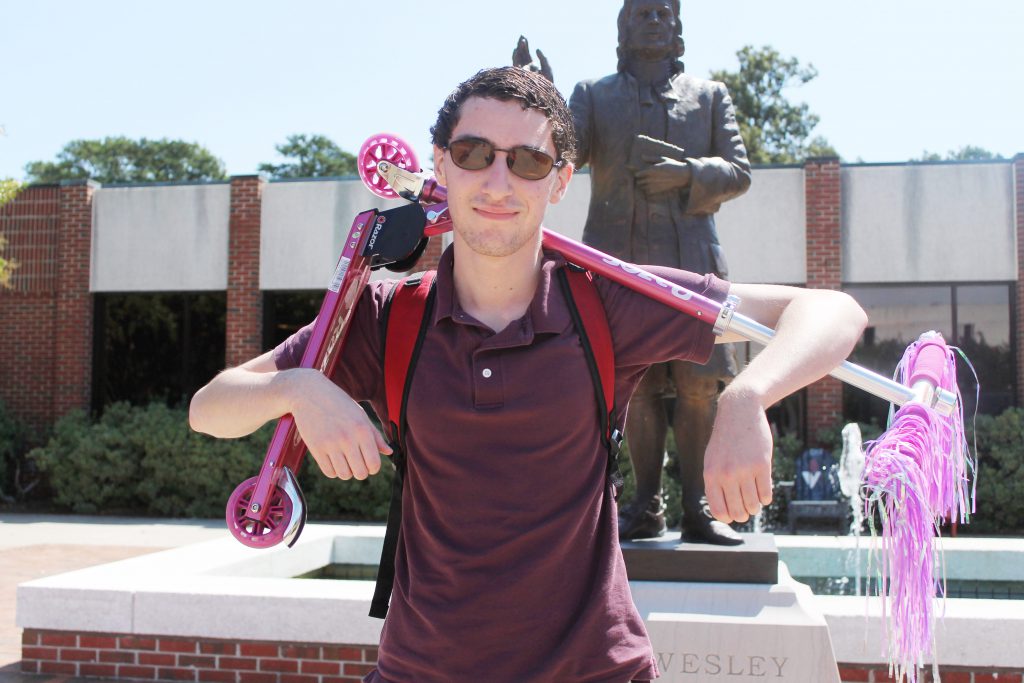