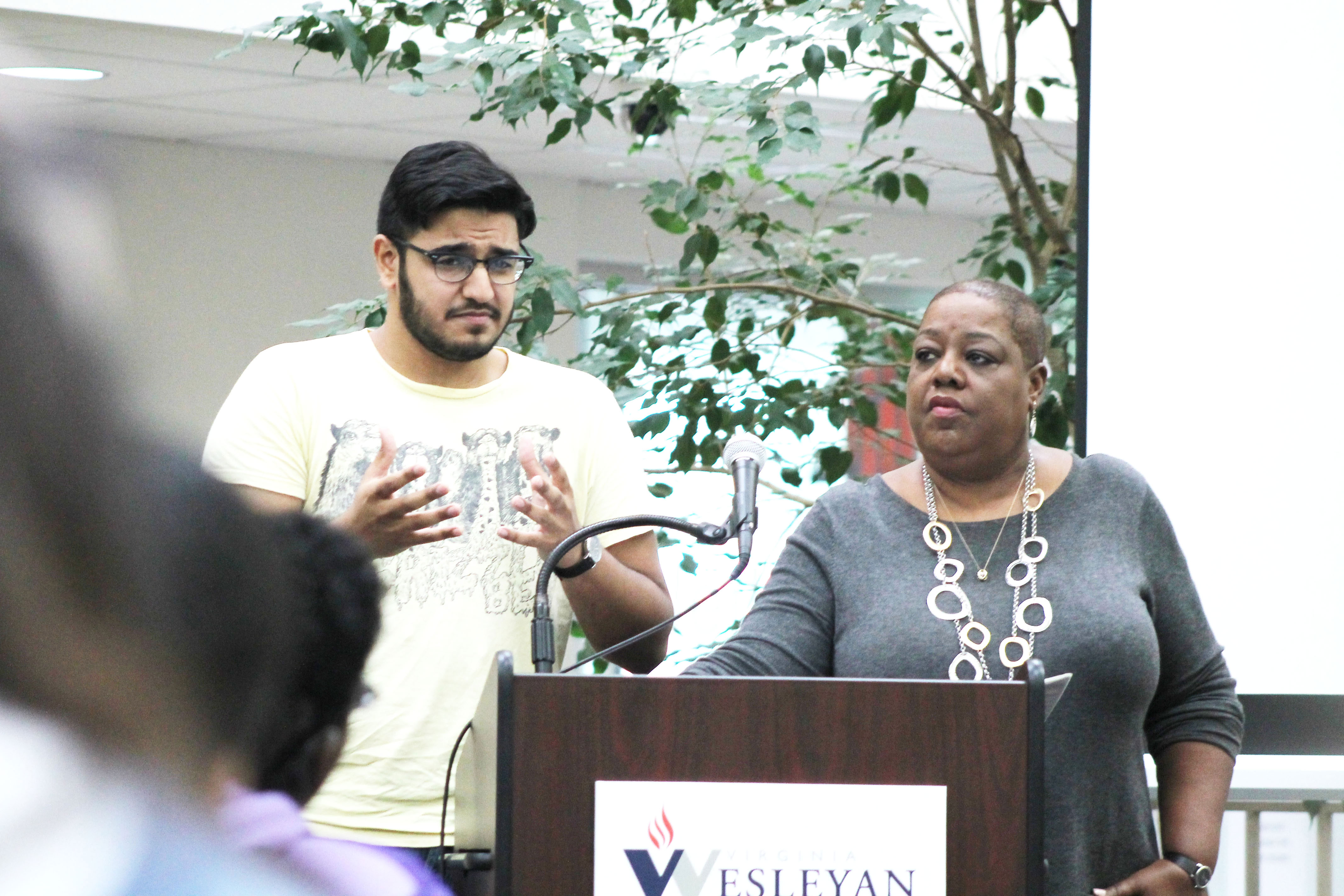 On Tuesday, Sept. 20 the Hofheimer Library was lined with chairs that were full of students, faculty and staff from Virginia Wesleyan College. Six clubs on campus, including African Student Association, Black Student Union, Spectrum, Latino Student Alliance, Love & Light and Phenomenal Women, joined together to put on a discussion entitled “Standing Together in a Culture of Fear.”

Barbara Hamm Lee, host of Another View on WHRV 89.5 moderated the discussion. She opened up by saying, “Not every college is sitting around having this conversation right now, it starts with Wesleyan.”

The overall focus of the discussion was to take a look at how our country is being divided based on different things and how Wesleyan can begin to stand together and make changes that are needed. The flyer that students received in an email said “We live in a country that is divided by race, religion, ethnicity and political affiliation. We have become a nation defined by violence, bigotry and fear. What can we do to challenge this culture of fear? How can we stand together to encourage dialogue, inspire creative solutions and heal?”

“What can you do as an individual to increase the understanding of those who are totally different from you?” Lee asked.

She allowed for everyone to just yell answers out. Some of the answers included: “having events to bring everyone together, having good character, respecting others, exposing oneself to viewpoints other than your own, and treating others as if they were you.”

Lee also asked what the audience thought could be done to make the Wesleyan community more inclusive.

A professor blurted out, “How about allowing professors to speak on these subjects in their class if it relates, without having to worry about losing our jobs.”

A student responded to that by saying, “Yeah, students would be able to react and speak up to voice their opinion while becoming more familiar.”

Senior education major, Tiffani Gregory said, “I think we could have random friendly reminders about equality throughout campus, there are flyers hanging up about everything else.”

There were several students and members of the college who stood to share their stories on how they have been affected by racism. One young lady shared that she often heard from people she come in contact with that she “spoke well for a black girl,” she said that she felt like people expected less of her because she was African American. Students who were biracial shared that it often took them a while to find where they fit in because it always seemed like they were not enough of one race, or too much of the other and that finding the balance between the two was difficult.

Musa Ghaznavi said, “It [the discussion] was productive, it’s a good step and a good discourse and discussion always helps.”

Amber Morris President of Black Student Union said, “I think it was a great move to bring different groups together. It actually has inspired us to begin having our own conversations and events that will continue the conversation.”

Cory Franklin said, “I heard Pastor Donnie say ‘We are trained to look at the 10% not the 90%’. Franklin said, “No one is focusing on the positive effects, don’t forget, but move on past the issue.”