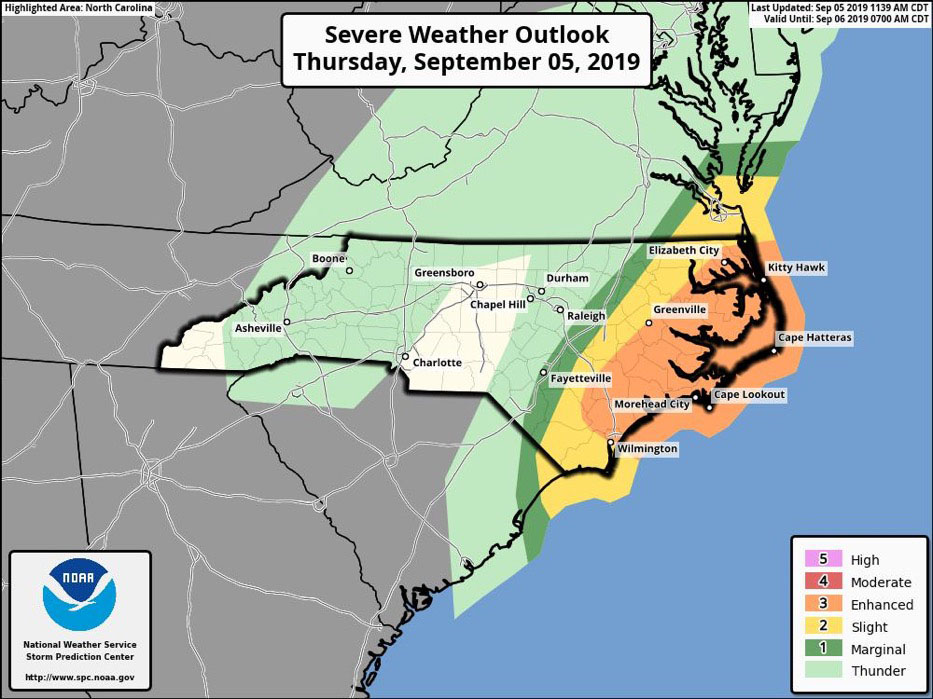 As Hurricane Dorian approached the Hampton Roads area, students and faculty prepared for the storm.

On Friday, Sept. 6, and Saturday, Sept. 7, Hurricane Dorian affected our area. This hurricane affected many Caribbean nations and the East Coast of the United States. The Hampton Roads region was under a storm surge warning, flash-flood warning and tropical storm warning by the National Weather Service. As a result of these warnings and the expected rainfall and tropical storm winds, Virginia Wesleyan canceled classes on Friday Sept. 6, the first week of fall term.

Virginia Wesleyan issued an official statement on its website stating, “The Virginia Wesleyan campus is located on high-ground and is not classified as one of the four possible evacuation zones. The campus will remain open unless a special evacuation order is made for our area.

Plans are in place for alternative power sources, food service, safe student activities and other appropriate services in the event of a power outage. That said, a tropical storm can pose travel hazards, and conditions can vary widely throughout our region. We ask those traveling to and from campus to use your best judgment and do not take unnecessary risks.”

The Hampton Roads region did not suffer the devastation that other regions endured, such as the Carolinas and the Bahamas. The only major effect was the loss of power in some locations. According to the Virginian-Pilot, “Dominion Energy reported that around 100,000 customers lost power in Hampton Roads at some point over the course of the storm.”

Freshman Ash Dobrenen had already gone shopping for groceries, but otherwise did not do much preparation. “We had milk and cereal, we have our water pitchers, so if the power went out we would have cold water. We have a bunch of snacks and cookies, if we did get hungry we didn’t have to go [outside] to the cafeteria,” Dobrenen said.

Dobrenen believes that the university handled the situation well but could have sent out the information about classes being cancelled sooner. “They didn’t tell us classes were cancelled until very late, the day before, so it would have been nice to know sooner,” Dobrenen said. “They sent out emails about what to do to prepare, and that there were events for us to do even though we didn’t have class.”

The storm was underwhelming to some, including Dobrenen who worked at stables back home in Greenville, South Carolina. “I have not experienced a hurricane before but where I was living, I was taking care of some horses, and there would be thunderstorms and lightning,” Dobrenen said. “I would have to lead the horses through that which was more stressful than going through this hurricane.”

Resident assistants, also known as RAs, are responsible for their residents and making sure that they know about updates from the university administration. Junior Kitana Finley is the RA for Deford Hall in Village IV and has had experience with hurricanes in the past. Finley lived in the Fort Myers area of Florida and remembers living through Hurricane Katrina. “Three days before Katrina, my youngest sister was born so during the actual hurricane we had a newborn in our household,” Finley said. “You always have to cover up your windows with wood in Florida and have lots of water. Also, cover the doors up with towels, if there is a bunch of flooding coming in, but we didn’t have to do that here.”

For Hurricane Dorian, Finley prepared for the storm by purchasing necessities at the grocery store. “I went and got two gallons of water and I went back another day to get bottles of water and gatorade. I got snack food because at least with those things I know I’ll eat them and I don’t have to cook them,” Finley said. “The store was very crowded. I went there, to get the things weren’t that bad, but the line to check out was like 45 minutes. People were not using their time effectively because you see people with 10 items in a regular aisle while they could have gone to the 20 or less.”

Finley advises that students be fully prepared for storms if they stay on campus. This includes having enough food, water and entertainment. “Always get water. It might seem stupid to have a whole bunch of gallons of water, but the thing is there is the rule that one gallon per person per day if you have no electricity,” Finley said. “Also, stock up on food that you are going to eat, that does not mean go get MREs and things you are never going to eat because we are college students and we do not want to spend money on stuff we are not going to eat.”

University officials prepared for this hurricane by monitoring it as soon as it began to form in the Caribbean. Vice President of Student Affairs Dr. Keith Moore is involved in the process of preparing for severe weather. “We base our information on government agencies and authorities that have the ability to actually give us good information that we can actually rely on,” Moore said. “We do not utilize local news at all. That is not something that we consider, we find it unreliable, hyped and it adds to more of the distress. We do not let outside influencers to necessarily guide what we do as far as closings, like businesses, other institutions, we really focus on what we know about the institution’s ability to manage a situation where we have severe weather.”

The university has several emergency generators that are always prepared to provide alternative sources of power. The institution secures more generators 48 hours in advance of a powerful storm that could result in losing power. “They wouldn’t power the entire institution, but it would certainly power the dining hall, so the kitchen would be open and it would be fully functioning,” Moore said. “We are reliant on the grid, we are reliant on Dominion Power to provide us power. If they can’t do that then we need to be able to meet the needs of our students.”