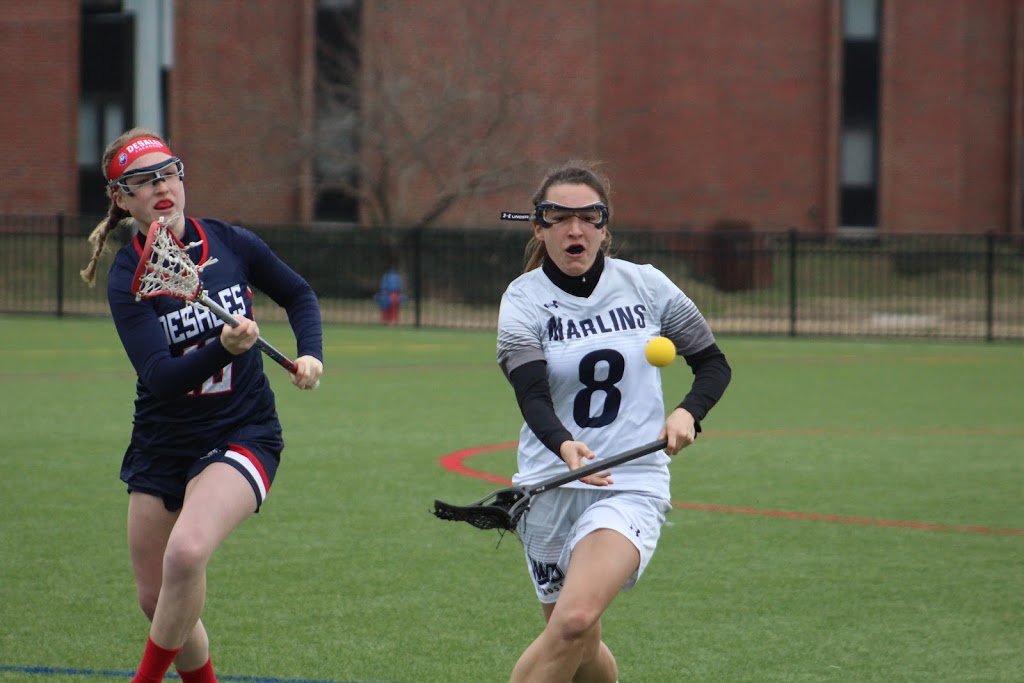 Women’s lacrosse coach Kendyl Clarkson has entered her second season as the Marlins head coach, and she has been changing the program in many positive ways. Last year the team ended with a winning record of 8-7 and this year they are 3-3 so far. Sophomore goalie Jordan Moilanen said that they face harder competition this season.

Clarkson used to coach at Methodist University in North Carolina before coming to Virginia Wesleyan. Her transition to Wesleyan was similar to her start at Methodist, as she led both teams to more wins.

“She’s a really positive coach. She looks to encourage people and push them to work harder,” senior Marie Lerch said.

Lerch also noted that Clarkson puts a lot of thought into her player’s mental stamina.

The focus on the mental game is really important for Lerch personally because it has helped outside of athletics in her personal and school life.

Freshman Maddie Gourley also expressed that she liked Clarkson’s coaching style. “She’s a great coach. She definitely focuses on trying to get everybody better individually and as a team,” Gourley said.

Moilanen said that the skill level is much higher this year, especially with the freshmen. They have more numbers on the rosters than they have had before.

Team chemistry is a key part in having success within a team, and the women’s lacrosse team has gotten a lot closer from team bonding.

“We hang out after games and after practices which has made it [chemistry] better,” Gourley said.

This team chemistry has helped the team jump out to an even 3-3 start, after losing to some quality opponents such as Meredith College and Christopher Newport University. Despite the loss to Meredith, some Marlins stepped up such as senior Abby Shope who scored two goals on four shots.

The team had two back -to-back victories on March 2 and 3, both of which finished with a score of 18-10. In the game on March 2 against Clarkson’s previous school Methodist, junior Tori Manahan logged four goals, which topped all other scorers. Moilanen also defended the goal and had four saves.

In the team’s most recent game on March 9, they fell to Widener University with a score of 16-10. Widener got out to an early lead, and even as the Marlins battled and continued to bridge the deficit, Widener just kept scoring. Burt scored five goals and Shope had four assists. Moilanen also had 12 saves.

With it being only six games in, the team has a lot of lacrosse left to play, and they are eying the ODAC tournament. The team has not reached the conference tournament since 2015, but Clarkson already improved their chances in her first season of coaching last season.

“All ODAC games will be a battle, the coaching staff and team are looking forward to all of those games. I think the overall consensus is that we have something to prove,” Clarkson said.

The Marlins next game is against Hope College during their spring break trip on March 18 in Hilton Head, South Carolina.

“We have a fun and energetic group filled with sarcasm, jokes and dance parties, but best of all they know how to turn it on when they hit the turf. I am proud of the work they continue to put in and excited to see where it take us this season,” Clarkson said.