The Samaritan House is a non-profit organization that works with survivors of domestic abuse, homelessness, and trafficking. Cooper said, “The wide range of cases that we deal with helps us not miss victims.” Human trafficking can be defined in three concepts: force, fraud and deception and coercion or intimidation. Physical restraint, false promises and threats are all signs that an individual is being trafficked.

Human trafficking can happen anywhere, especially in Virginia due to the many interstate highways, large air and sea ports and the high tourism rate. Virginia is ranked 15th in the United States in reported cases of human trafficking. While 80 percent of victims are women, the Samaritan House recognizes the male victims and strives to serve all people. The average age of a trafficked victim in the United States is 13 years old.

The Samaritan House states that human trafficking is often the result of the compounding vulnerabilities in a victim’s life. The populations that tend to be more vulnerable are youthful runaways and homeless, children in foster care, individuals fleeing violence or natural disasters, individuals who have experienced trauma and foreign nationals seeking a better life. Although foreign nationals can be vulnerable targets, Virginia victims are primarily United States citizens. There are many myths that surround the idea of human trafficking. Transportation is not required in a human trafficking case. Some cases may even occur within their own home. Another myth is that physical restraint and force is required. Victims can be mentally restrained as well. Although many think that in order to be a victim of human trafficking they must be kidnapped, it is important to know that there can be initial consent. Traffickers may give a false promise of money to the victims money or even begin a relationship with them. The fact is, initial consent does not matter. Whether a victim gives consent in the beginning or not, the manipulation and trafficking can escalate.

Traffickers groom their victims in order to gain complete control over their identity and individuality. They will remove the victims from familiarity and support structures, perform physical and sexual assault that comes with blackmailing and keep the victim in confinement and torture them. Other ways traffickers will groom their victims are by renaming and branding them. They will coach them in how to talk, walk, dress, eat and sleep. In order for the victims to be sold to others, the traffickers will force them to watch pornography as a way to intstruct.

The big question is: why is this happening? The easy access to the Internet has made the sale and purchase of an individual for labor and sex easier and faster. People can be sold multiple times which allows the trafficker to gain more profit, which is the primary reason for human trafficking. Hotels, construction sites, restaurants and truck stops are just a few places where human trafficking can take place.

Victims may feel as if it is impossible to escape their traffickers. Reasons that they may feel this way are, isolation, debt, fear, confinement, threats to loved ones and shame or self blame. Sophomore Maura Bridges attended the event for her Social Work class. Understanding and realizing when someone is a victim of human trafficking can be difficult at times. “Look for the red flags and indicators in any situation,” Bridges said. Red flags and indicators to look out for in a victim are little to no personal belongings, lack of knowledge of their whereabouts or frequent movement and no identification. Those who look malnourished, are branded and look as if they have endured physical abuse could potentially be victims of human trafficking.

The Samaritan House provides services such as emergency housing, case management, children’s center of excellence and victim advocates.  Sophomore Lexi Thomas said she is now more aware of her surroundings and has an understanding of what to look out for. “I am willing to go out and do more about human trafficking. I want to help in anyway that I can.”

For those who are looking for ways to help, volunteering is welcomed at the Samaritan House and encourages those to give as much as they can to victims such as clothing, food and more. Other ways to help are to be aware, education and donations to the programs. Katie Cooper stated that the most important thing a person can do is to educate themselves and support each other. In order to report a possible human trafficking case, call the Samaritan House at (757) 631- 0710 or if in immediate danger call 911. 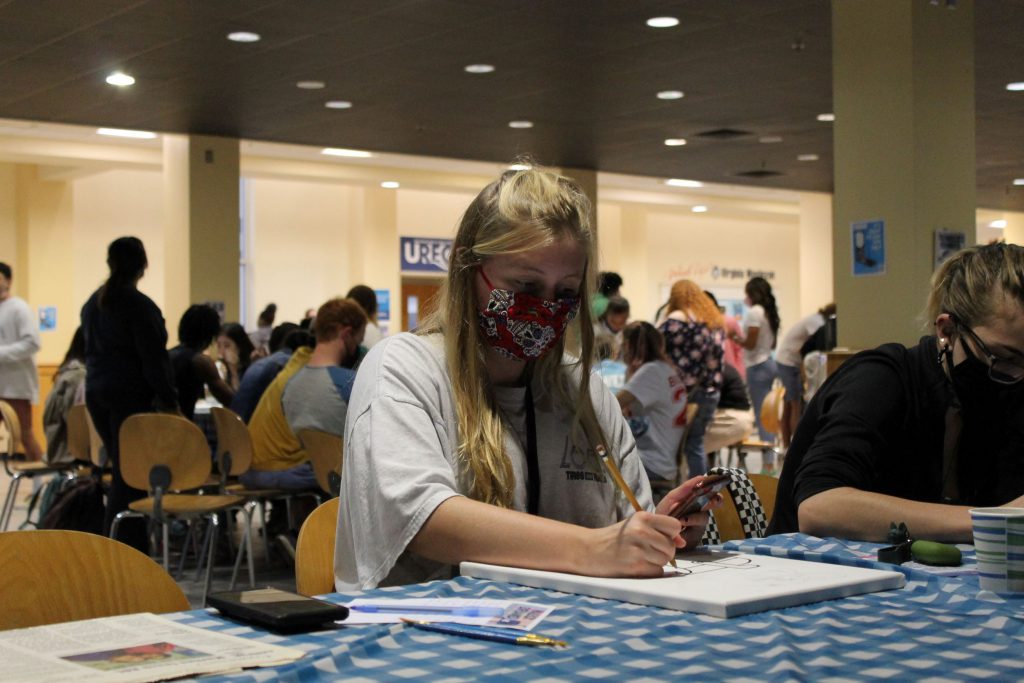