It appears as if the world has been plagued with gun violence as of late, especially where children are concerned. Nothing is scarier than a parent being at work only to receive a phone call or see on the news that their kid’s school has been the scene of school shooting. I couldn’t imagine being in those shoes, but it seems like with all of the dysfunction, misinformation, and sometimes entire avoidance of the subject, I probably will be in the future.

Fortunately, on a personal level, I have only had one experience with a gun. Unfortunately, it was when I was a child.

I was attending elementary school, Bettie F. Williams Elementary. I remember it was springtime and I was in fourth grade. We were doing busy work in class and I had left to go to the bathroom. As I was coming back, another student that I knew from class was walking the same way. He and I had always had a complicated relationship. Even as children, there was an obvious popularity totem. I was on the low end, as I had glasses, was bowlegged, and had recently moved to the area from a private school in Norfolk. This other student was at the top of the popularity food chain. He was an athlete, handsome, and had an older brother who had also attended the school.

We played football together and I developed a crush on him at some point, but it was never reciprocated. Some days, he acted like my friend by helping me in class or talking to me. Other days, I was his target and he’d tease me about my hair or the clothes that I wore.

On this day, he had decided that I was his friend.

We started talking as we made our way to class. He asked if I wanted to see something and, wanting to take advantage of how long he would talk to me, I said “yes.” He reached into his pocket and pulled out a gun. I remember it was black and that as soon as I saw it, fear flooded my body and made my blood run cold. I hastily told him it was cool and avoided eye contact for the rest of the walk to class. Soon after our return, it was time for recess.

I couldn’t concentrate the whole time we played kickball that day, even though it was my favorite. I was shaky and nervous. I didn’t know what he was going to use it for or even if it was real. I just knew I didn’t want to be around it or know that it was in the same area that I was in. I feigned a headache and went back to class early. I talked to my teacher and when everyone returned from recess, the student who had showed me the gun was gone. I heard whisperings during the remainder of the day that he had been called down to the office during recess, but no one knew why.

Later I found out that another student in our same class corroborated my statement about the gun because he had shown her too. He returned to the school halfway through the next year, but showed no indifference towards me. I don’t think he knew that it was me that told our teacher. He continues to talk to me to this day. I will never forget the chill that ran through my body when he showed me in what I thought was a safe place.

In my opinion, gun laws are too lax these days. There have been so many videos of people documenting the process of buying a firearm, unbeknownst to the sellers that they are being recorded. Some of these people exposing this journey and buying the guns are underage or have some other thing that should prevent them from successfully completing the purchase. Yet, they still make it through with barely any questioning. I’m not saying take away the guns completely, but it should be much harder to acquire something that could easily take a life. I can’t stand seeing news reports almost every day of yet another school shooting or accidental shooting of a child by another child. We need to do more to advocate for the future generation and their safety, because a majority don’t have that voice yet. 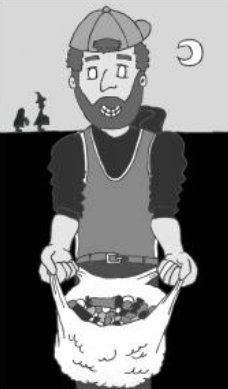