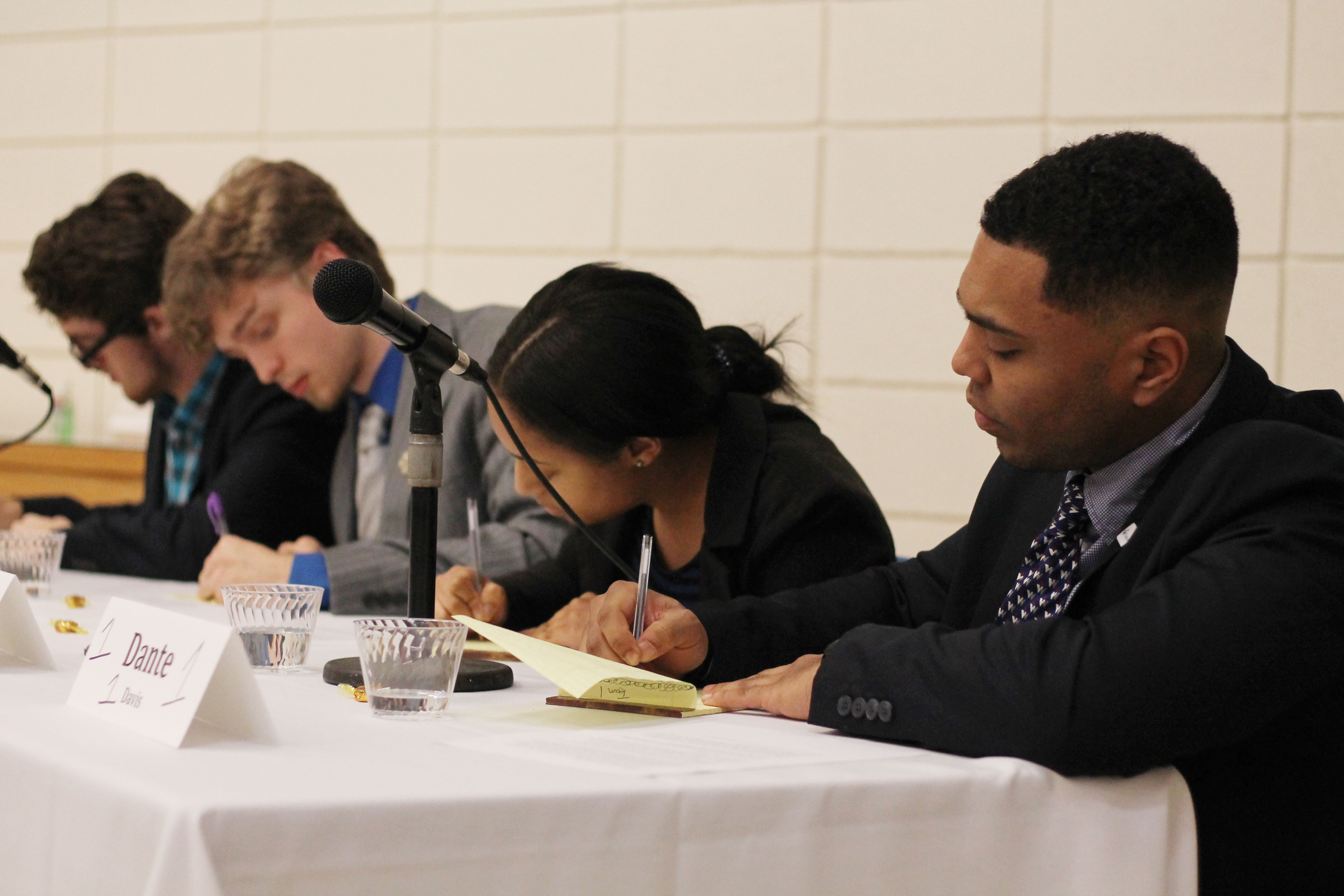 On Feb. 12, many people were at the beach, enjoying the balmy 80-degree weather and the crystal blue skies. However, those competing in the 18th Annual Wells Fargo Ethics Bowl, including eight VWC students, chose instead to crowd into the stuffy Blocker Hall Auditorium and debate this year’s topic, “Ethics and U.S. Presidential Politics.”

Although VWC did not advance to the final round, Team 1, consisting of junior Riley Conrad, junior Nich Hipple, junior Kelsi Robins and sophomore Melissa Fisher, went undefeated in three of the four total rounds. Team 2, consisting of sophomore Tanail Canty, junior Dante Davis, senior Kyle Grabulis and senior Jared White, conceded twice on Sunday to the opposing teams but came back to win both matches on Monday. Ultimately, neither team advanced to the final.

“Ethics as a discipline can be so abstract… how do we move from ethical theory to ethical action?”

This question, in a nutshell, is at the heart of the Ethics Bowl.

“It’s challenging in the way it makes you think…it makes you break down what you may do in everyday life and not think about,” Davis said.

The first ethics bowl in 2000, which Virginia Wesleyan College won, was the brainchild of a journalist named Roger Mud who thought it was important for college students to ponder ethical issues.

Students like senior philosophy major Zack Perry from the University of Richmond agree with Mud’s viewpoint, reinforcing the current place that ethical discussions hold in the United States of America.

“The current executive orders given by President Trump certainly violate a lot of ethical rules, and this is a topic of debate,” Perry said

Each case argued was unique but they all centered around the question of how people can act ethically when those they work for act in ways that disagree with their personal morals.

For example, in one case, debaters were asked what a woman named Darcy should do when she discovers that the presidential candidate she works for has acted in ways that are contrary to many of her campaign promises and Darcy’s personal beliefs.

Debaters answer the questions in a number of ways, often by pointing to an individual’s right to autonomy or through noting the right the American people have to knowing information about presidential candidates. The VWC teams especially were careful to define the stakeholders in each case so as to make clear all the people affected by the situation.

The rounds begin when a representative from each team partakes in a coin toss to determine who will go first. Once that is settled, the case is read and the teams get six minutes to decide how they want to answer the question. Next, both teams give their defense. Once the defenses are through, each team poses a question to the opposing team. After answering these questions with limited time constraints, the judges then pose questions to the teams, which they must answer. Finally, each team takes two minutes to give a closing statement.

For students, debating is a way of enhancing personal skills.

“I’m very introverted, so this is an experience that taught me how to, one, do public speaking, something I was very uncomfortable with. It just stretches me to get out of my comfort zone,” Conrad, sporting a black suit and a pair of red-rimmed glasses, said.

The debaters are instructed to be very professional in their answers and always refer to one another by the name of the represented institution or simply as “our opponent.” Both teams speak with passion, but the argument is ultimately very cordial, with no voices raised or aggression expressed. Each question is greeted with a polite “Thank you for that question” before it is answered.

White explained that enjoying a good argument is a key ingredient for a debater.

“If you like to argue, you will get better after doing this…I think people who are, I don’t mean to say aggressive, but people who enjoy public speaking would enjoy this very much,” White said.

In addition to learning successful debating tactics, students learn how to work well on a team of four often-opinionated persons.

“My team has a good sense of unity. Even if we don’t win, I’m proud,” Robins said.