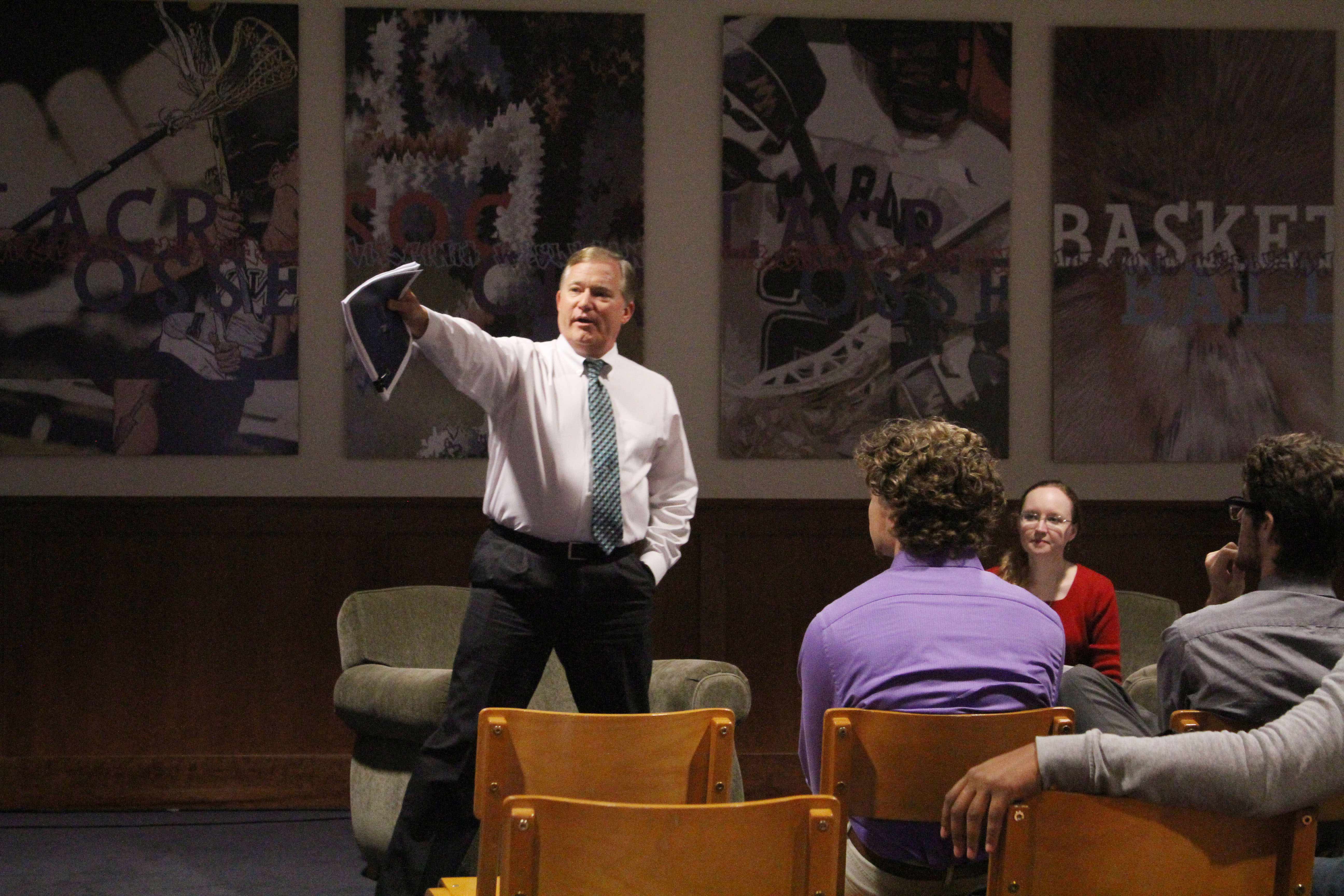 President Miller gave students a glimpse into the future of Virginia Wesleyan College by presenting the 10-year Master Plan on Nov. 30. Miller discussed such projects as the construction of the YMCA Partnership Building, the Susan S. Goode Fine and Performing Arts Center, Oxford Village, a new fitness center, fencing around campus, new parking, new dormitories and an outdoor track, as well as a walking path extending to Lake Taylor.

Construction of the YMCA Partnership Building will begin on Dec. 8. The building will be constructed outside the arboretum toward the back of campus and will feature three classrooms, a multipurpose room, eight office spaces, a kitchenette and an amphitheater large enough to accommodate 250 people. Students and faculty will use the building during the school year, and the 225 to 250 children attending YMCA’s Camp Red Feather will make use of the building during the summer months.

Miller also said that construction of the new Susan S. Goode Fine and Performing Arts Center would take place in three phases. Miller stated that it is the college’s desire to get phase one underway as soon as possible. However, it still must raise the necessary $14 million in funding. Miller hopes to have this first phase completed within two years

Oxford Village will be affordable, safe and well-maintained.

Oxford Village is an apartment complex to be constructed on the 12.8 acres of Wesleyan-owned land directly across from the college on Wesleyan Drive. The Franklin Johnston Group will build the complex. Oxford Village is set to include 252 units, which will include one-, two-, three- and possibly four-bedroom apartments. The apartment complex will include a recreation center, swimming pool and one-lane bowling alley. Miller said that Oxford Village would be “affordable, safe and well-maintained.” The apartments will be open to students, faculty and those not associated with Virginia Wesleyan College, such as employees of Norfolk Academy and retirees.

According to Miller, with the construction of the Greer Environmental Sciences Center, VWC’s campus will officially have its first quad. The library, Blocker Hall, the Monumental Chapel, the Jane P. Batten Student Center, Boyd Dining Hall and the Greer Environmental Sciences Center will work together to form the shape of a rectangle. In order to create a quad-like atmosphere, Miller mentioned extending the patio area off of Boyd Dining Hall where the John Wesley statue currently stands. This proposed extension would add an additional 4,200 square feet to the current structure, which would introduction of an abundance of outdoor seating options in this area.

Miller plans to add new signage at the campus’s entrance as well as introducing black, decorative fencing around the perimeter of the campus for security purposes. Ideally, construction on the fencing would begin this spring or summer.

In terms of parking, the plan is for a new parking lot to be introduced by Blocker Hall that will accommodate an additional 70 cars. Creating a road from the Village IV parking lot past Blocker and onto the road that runs to Godwin was additionally part of the vision. The new parking lot and loop will hopefully be completed by June, as the school already has a donor interested in the project.

The college has also received funding for an outdoor track. The track would consist of eight lanes and include areas for high jump, long jump, triple jump and javelin throw among other track and field related activities. Miller stated that work on the track will likely commence next summer.