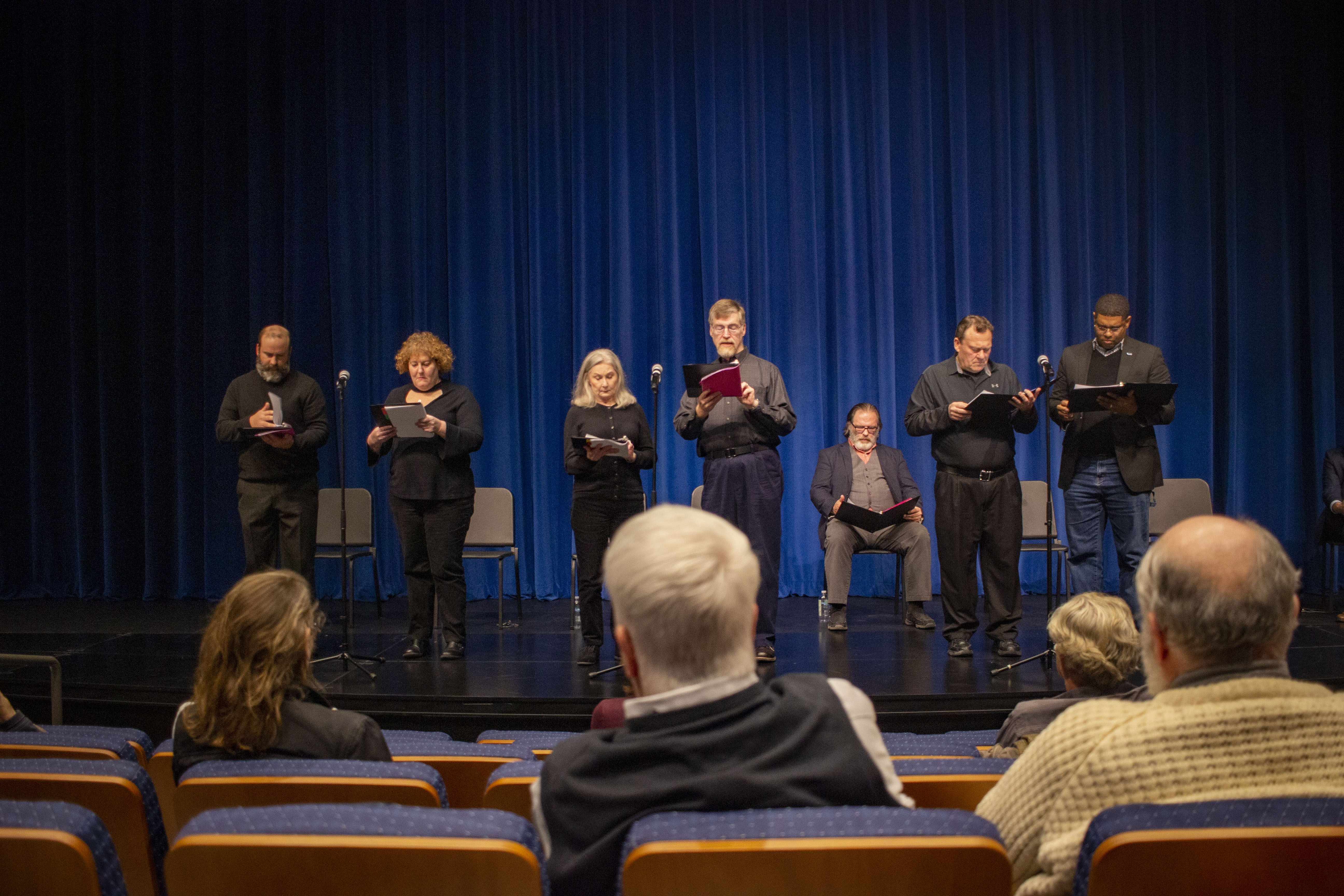 In a world where war is constant, it is hard to understand the tragedies that come with it. On Thursday, Feb. 6 and Friday, Feb. 7, Virginia Wesleyan University students came to the Goode Fine and Performing Arts Center to attend The Warrior Chorus Project where they listened to the stories of those who have served. Peter Meineck, a former Royal Marine and current Classics professor at New York University, gathered local veterans to portray the tragedies of war that have been affecting all those involved since Ancient Greece. Greek tragedies represent war, coming home, democracy and relationships. Meineck believes that the Greeks understood the effects of war and used theater to create dialogue. The use of dialogue is full of complexity and allows for an outlet to talk about war.

Greek warriors were forced to choose between their state and family just as many soldiers do now. After coming home from war, it is difficult for soldiers to return to their normal lives. Cory, a veteran who performed at The Warrior Project, stated that he returned from war within three days while Greek warriors traveled for months to return home. It is difficult to be able to recollect after being at war. Many soldiers struggle with Post Traumatic Stress Disorder which has been evident for years. Those in Ancient Greece were aware of the toll that war takes on a person’s mental health. The Greeks wanted to make the theater a healing space. They believed that talking about the tragedies of war would make it easier to deal with.

Junior Hayden Thornbrugh believes that mental health has been an issue for service members for decades has not been addressed in the way that it should. Meineck stated that the Greeks had a sophisticated way of looking at mental illness. The Greeks believed that mental illness was not an individual’s fault but that it was the gods who chose this for them. Meineck used Ajax’s suicide speech to portray the way warriors concealed the way they were feeling. “Sometimes texts can illustrate how we really feel,” Meineck said. Stone Skeeter, a VWU alumnus, attended The Warrior Chorus Project due to his interest for Ancient Greece and his care for service members in the past and the present. “Whether it be for the lack of interest or for the lack of resources, servicemen and women have been overlooked for some time now,” Skeeter said.

After the performance, the veterans answered the questions that the audience had about their personal experiences. “When you go to war, you do not come back the same” Cory said. Soldiers do not have time to recollect after being at war. Cory spoke about his struggle to return back to normal life, “I was planting grass seeds at four in the morning because I was restless and aggressive,” Cory said. “Everything means something.”

Meineck believes that Greek stories magnify the effects on family. It is difficult to fully understand the impact that war has on the families of those who are serving. He used “The Odyssey” to show the transition from being at war to being with family again. Doug, a veteran who performed at The Warrior Chorus Project, stated that he was on continuous deployment for nine years. While being away from his family for nine years, Doug started to think about how this was affecting them, “How much did my absence contribute to what my family’s problems are and what they became?” Doug asked. Anne, a performer at The Warrior Chorus Project, was the daughter and the wife of servicemen. One of the hardest obstacles for her was having to get to know her spouse all over again. “War takes a toll on everyone,” Anne said.

Greek tragedies represent the effects of war in a way that makes it easier to speak about. The Warrior Chorus Project brought these stories to life which made it possible to relate to when speaking about war for everyone. Sophomore Ryan Westpfahl related to these stories because of her relationship with a serviceman. “The parallels of Greek tragedies and the modern day war became obvious through the actors’ performance and the dialogue that followed,” Westpfahl said. “The performances provided a very necessary opportunity to discuss the continued tragedies of warfare.” It is known that war affects all who are involved yet it is uncommon to discuss the mental illness that the trauma from war creates. The Warrior Chorus Project brought the discussion of war and mental illness to light.