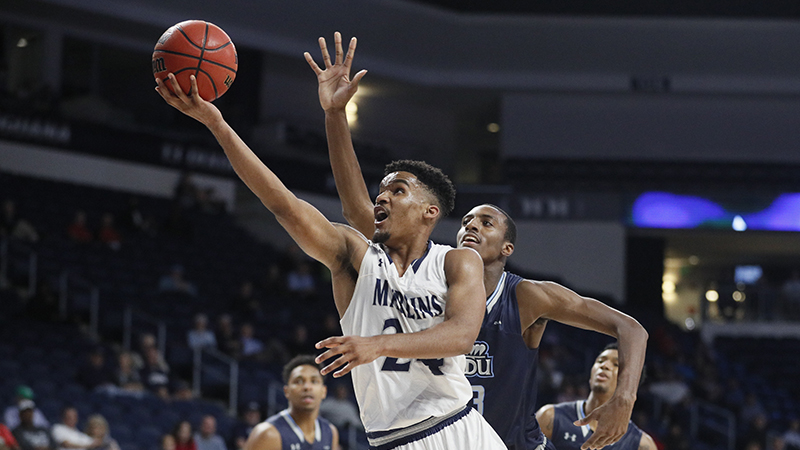 The Virginia Wesleyan University Marlins are back to being one of the best teams in the nation, as they have been ranked 15th in the latest ‘D3hoops.com’ top 25 poll (as of Feb. 2).  With a record of 17-3(as of Feb. 5), the team bumps up from the previously ranked #18 in last week’s polls, to #15 this week.

The Randolph-Macon Yellow Jackets and the Washington & Lee Generals are the only other teams from the Old Dominion Athletic Conference to receive any votes towards the top 25 D3Hoops.com coaches poll.

The Marlins have been led by a high powered offense, averaging 77.7 points per game and scoring in the triple digits on three separate occasions this season.

Having five scorers averaging double-digits a game, it shows how the team is learning to play all around rather than selfish basketball.

When talking to Coach Dave Macedo, he described the difference between this year’s team and past year’s teams as a “winning culture”.  He continued to say that the Marlins have “done a good job creating the culture they want”.

Macedo and his crew are coming off of a great game against the top team in the Old Dominion Athletic Conference (ODAC), Randolph-Macon College, who in the latest D3hoop.com poll was ranked third, and received one first place vote.

The final score of that game was 67-61, which the Marlins took the loss.  Macedo had good things to say about the tough matchup that they faced on Jan. 22.  He said, “Macon executed in the second half.” Macedo said that in those kinds of big games, “the margin of error is small.”

Taylor Major, a senior captain on the team, also talked about the big matchup with the R-MC Yellow Jackets.  He said, “we had plenty of opportunities to win that game.” He continued to say, “a few more balls bounce our way… it’s a totally different game”.

Being a captain, Major said he is “very proud of our team” in the way that they have competed this year.  He wanted to stress about how determined they are to see the Yellow Jackets again, hopefully in the ODAC tournament.

Sophomore Guard Evan Tebay also had his input on the Macon game.  He said, “the margin for error is going to be little. Everyone is trying to give us their best game.”

He said “now we’re not just in games with people…sending the message, that it’s two of us. And we will see that Macon team again”.

When talking to Major, he had to say what’s different about this team in comparison to the teams prior, is the “initiative” that the teams possess. He said, “Getting in the gym…and weight room on their own and then taking the extra step to invite other teammates.  I think that’s huge. That means a lot, to getting better in the process.”

Major really appreciates the work that his team has out in not only during the season and the games, but the entire fall and preseason.

Tebay went on to talk about his team, and how he had high remarks about them and the work they have put in.  When discussing the differences he sees with this great team he is on now, he said, “Consistency. Doing the little things all around to make us focus is big”.

He also said that this team “executes on offense and defense.” This team has shown that they have the will to win when it comes down to it.

With the Marlins looking to make a deep run not only in the ODAC tournament, but also the NCAA tournament, they would need to finish the season strong.  All of the team’s final games will be against ODAC opponents, so they still have a lot to play for.

VWU is currently sitting at an in-conference record of 9-2 which is good enough for second place.  Randolph-Macon is currently in first place with a 12-0 record and is the only team slated above the Marlins in the standings.