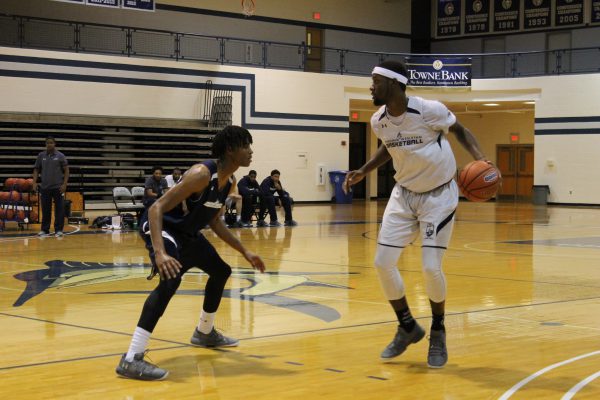 The men’s basketball team is eager to seek revenge after they were upset in the first round of the ODAC tournament last season, and they are off to a hot start to prove it. With an overall record of 4-2 and 2-0 in the conference so far, the Marlins have a squad of offensive threats who can score in many ways, but also aren’t reluctant to share the ball.

The Marlins have four players averaging double figure scoring and the team also averages 11 assists per game, while senior captain point guard Keijon Honore leads the way with 4.3 assists per game. Honore has been the team’s floor general for the past two seasons, and with his senior status comes a poised style of play as he’s found success in passing and scoring with minimal turnovers. Honore reels in 12.7 points per game, the second-highest on the team.

Along with Honore, Tim Fisher has been an offensive force in the paint. Fisher can rattle the defensive team as he has proven he can consistently finish around the basket and hit outside shots. Because of this, he has become the go-to player for end-of-game situations. Fisher leads the team in points per game with 17.5, as well as rebounds per game with 8.7. He already posted two 20-point games this season, earning a career-high of 25 against Averett on Nov. 28.

Burt acknowledges what the team must do in order to remain successful this season. “Play hard, play as a team, and trust each other,” Burt said.

Even with scoring across the board from the starting players, sophomore sharp shooter Corey Pelham said the team’s greatest strength is their bond. “We’re not just a team or even friends, we’re like brothers. We’re a family,” Pelham said. In his second year, Pelham contributes from off the bench this season, averaging 16.5 minutes per game.

Head Coach Dave Macedo led his team to a National Championship in 2006, and he hopes for similar results this season. He believes that in order to be successful,  the boys have to pay attention to take care of the little details, take the next step on offense and defense, trust each other and bring more confidence to the floor. They have to be able to step it up after Christmas break, which is really no break at all for winter athletes. The Marlins will square up to their chief rival Randolph Macon at home two days after New Year’s Day on Jan. 3.
The Marlins recently had a big conference win against Washington and Lee on Dec. 1 with a score of 87-77, which makes them currently undefeated in the ODAC at 2-0. Senior RG Nicholson had a career-high 20 points, Fisher had 15 points, Honore had 14 points, and Steward with 10. Burt led the team on the defensive end with 15 rebounds, a career-high for him as well. Fisher also hauled in 11 rebounds, earning him his third double-double of the season. This win was also Coach Macedo’s 399th win with the Marlins, just one game short of 400. Macedo and the team seek this milestone and have the opportunity to snag it in their next game at home against Mary Washington on Dec. 5.

For the Marlins to continue their success this season, they must look to continue sharing the ball and having multiple players contribute scoring.