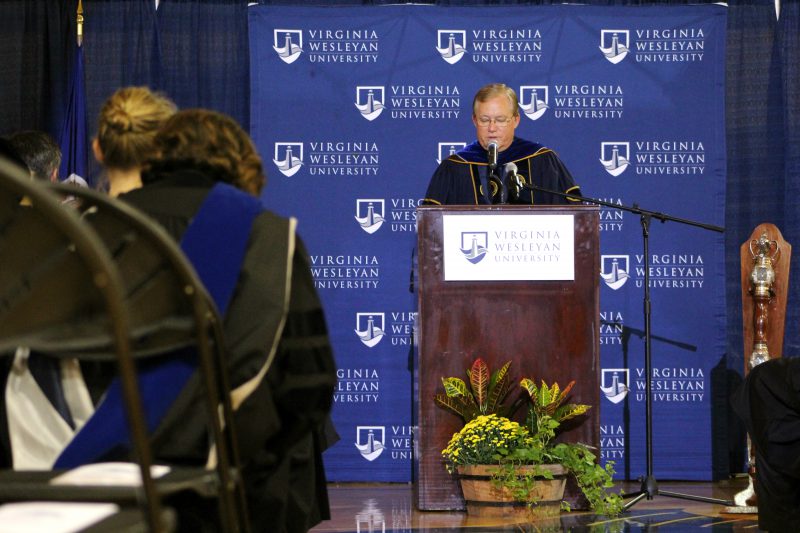 Hultgren currently serves as a professor of philosophy and Director of the PORTfolio Program, and has served as an NCAA Faculty Athletic Representative for more than 40 years.  He has been a member of the Virginia Wesleyan faculty since 1968. Dr. Scott D. Miller, President of Virginia Wesleyan University, described Hultgren as representing the past, present, and future of the university.

Faculty, students, and alumni attended the Founders Day Convocation, which began with the Prelude and Processional by the Eastern Virginia Brass Quintet as the faculty processed into the convocation center. This was followed by Virginia Wesleyan’s Vox Vera choir performing “The Star Spangled Banner.”

Miller both introduced Dr. Hultgren as the keynote speaker and presented the alumni awards. Miller also offered remarks on the state of this academic year. “May it be a wonderful year with historic moments,” Miller said before presenting the alumni awards.

The Distinguished Alumnus Award went to Joseph P. Ruddy, who graduated with a recreation and leisure studies degree in 1983. Ruddy is the Chief Innovation Officer for the Port of Virginia. The Alumni Service Award went to Clayton J. Singleton, who graduated width an art education degree in 1994. Singleton is an artist and teacher in Norfolk Public Schools, and formerly worked with the Virginian-Pilot.

The Graduate of the Last Decade (GOLD) Award went to Alisa W. Crider, who graduated with a degree in communication in 2010. Crider currently serves as the public relations coordinator for Hampton Roads Transit, and is known for bringing national attention to Hampton Roads via on-air appearances and interviews.

Hultgren followed Miller, and was welcomed to the stage with warm applause. Hultgren opened his speech by reminding attendees that “It’s a great day to be a Marlin!” Hultgren then recalled how he originally came to the university, then college, for his interview, and the possible risk that some took when coming to Virginia Wesleyan. Back then, Bray Village was the only village on campus. The school had yet to earn accreditation of a higher education institution. The first class at Virginia Wesleyan had to wait to graduate for the accreditation to be retroactive.

Virginia Wesleyan College officially opened its doors to students in 1966.The first private college in the Hampton Roads area came together as the brainchild of Methodist minister Joseph S. Johnston. The school became chartered in 1961 and has since given diplomas to over 10,000 graduates.

Hultgren continued to talk about what has transpired since Miller became President of Virginia Wesleyan. “We ain’t seen nothing yet,” Hultgren remarked.

When asked about his reaction to the news of him being the keynote speaker, Hultgren said that he was notified “shortly before it was announced. I was very surprised and honored when asked to be part of [Founders Day].” Hultgren said, “This is something new. This is only the third time we’ve done it. It was one of the things that when President Miller came that he was really interested in. Trying to get us aware of where we’d been, where we are, and of course, where we’re going. The nice thing was trying to tie some of those alums in.”

Hultgren also talked about what it was like to have the alumni there.”The whole morning was pretty exciting. I had two of the students, and it was sort of great to see them again and hear their remarks. I wished more students could have been there. I wished they [alumni award winners] could have spoken rather than me. I think they had really good things to say. It would have been really good for students to hear,” Hultgren said. In reference to his speech, Hultgren said, “You’re always nervous about those things and you’re trying to say something that people would enjoy hearing. I thought it went well. I was just kind of overwhelmed at the end when people stood. I still can’t fathom that. That was very exciting.”