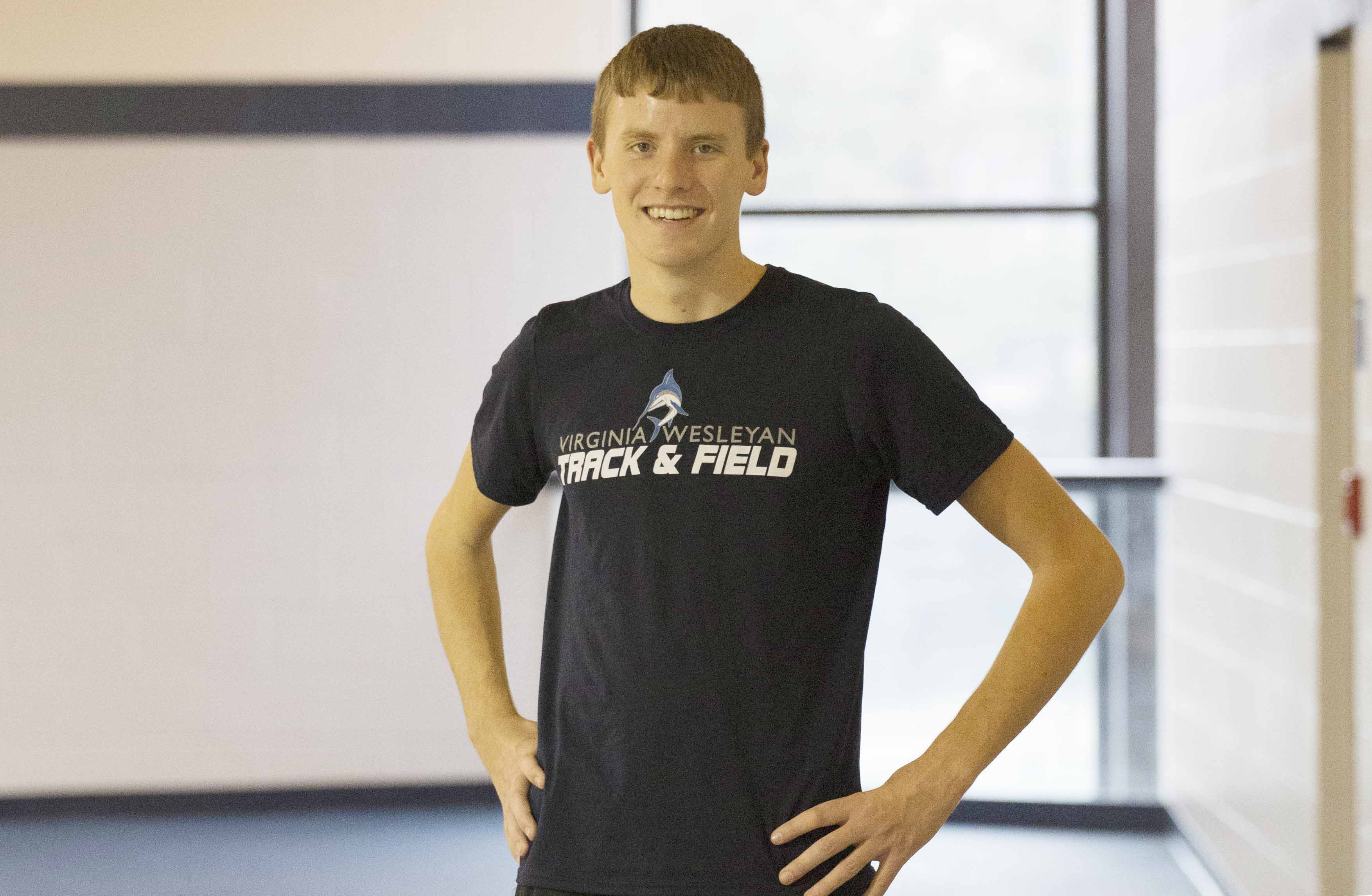 VWC sophomore Trevor Maloney has made a big impact on campus, both on the track and in the classroom

Though his successes are far from being limited to the world of athletics, Virginia Wesleyan sophomore Trevor Maloney recently achieved the fifth-fastest time for the 3000 meters in the history of VWC’s track and field program.  He did this by running the 3k in 9:14.36, placing ninth at the ODAC Indoor Track and Field Championships, held March 1 in Landover, Md.

Also at the ODAC championships, Maloney and his teammates Hunter Melius, Jermell Chester and Dustin Ogburn placed fifth in the distance medley. Their time was 11:06.84.

However, Maloney said that for him, the “…best athletic performance [is]…when I can walk away from a meet knowing that I did the best that I could do and knowing I didn’t have anything else to give at the end of each race.”

With cross-country’s season running all through the fall, and track and field going from indoor competition in the winter through a five-week outdoor season in spring, he is “in season” during the whole academic year. Doing both sports, he said, is “tiring, but it’s worth it in the end.” He said it gives “…the gratification of being able to compete on a regular basis. Meets are held about every other weekend.”

Maloney started running during middle school, then “got serious” around his sophomore year of high school.

One thing he’s noticed, he said, is that track and cross-country often don’t get the amount of attention that other sports enjoy. For example, he said, the first spring-semester issue of the Marlin Chronicle covered every other VWC spring sport except track and field.

“Running that much is very time-consuming and very hard work,” he said. “It’s just as competitive as anything else. It just feels like we get swept under the rug,” he said, which is “aggravating.”

Maloney agreed that part of the problem could be that VWC students never have the chance to see the runners compete at home, since the campus has no track. That topic also came up during a recent meeting the track team had with the president of the college, William Greer.

“He expressed that he was very disappointed that the funds for a track had not been gathered yet,” Maloney said. However, he said, President Greer told the team that funds for a track are still a high priority for the college.

The meeting with Greer was held to recognize the track team for a remarkable achievement.

Maloney’s own GPA has a lot to do with that. The biology major is currently pulling a 3.96, having gotten his first college A- course grade last semester.

Adding to the demands on his time from running and from keeping his grades up is his job in the student ambassador program.

Trevor has definitely made his own name, in the program and here at Wesleyan

King-Pack said that she had previously known Maloney’s older brother Tim, who had “really stood out in the program” as a student coordinator. Thus, when Trevor Maloney first came to work there, she started to call him “Tim’s little brother.” She quickly corrected herself, saying she knew he was more than that. Maloney agreed and said, “I’m going to show you how much more I am than Tim’s little brother.”

“He has a wonderful work ethic. He’s quick to ask what he can do,” King-Pack said. “He’s always prompt, always efficient. He doesn’t take on more than he can carry out.”

“Trevor has definitely made his own name, in the program and here at Wesleyan,” said King-Pack.

Some of Maloney’s job responsibilities are mentoring new ambassadors and assisting with their training, as well as contacting potential students.

Many people with Maloney’s schedule would have no time for friends or would be chronically sleep-deprived. After all, he’s added a job and two sports to the three things that popular wisdom says college students can only have two of: good grades, a social life, and sleep. But what’s his opinion of that maxim?

“Not true,” Maloney said. “I feel like I have a really good group of friends.” He said he gets to spend time with teammates and others, going out to dinner or just hanging out. According to senior Hunter Melius, a member of both the cross-country and the track and field teams, VWC runners often go together to watch other Marlin athletic events.

“Trevor’s at 90 percent of them,” Melius said, especially soccer, basketball, and some volleyball games. They can’t watch much field hockey because the game times often conflict with track practice. While Maloney is serious in the classroom, his demeanor is very different at a sporting event: loud and enthusiastic.

“He’s very invested in the competition that’s going on,” Melius said, although he does stay “respectful.”

Concerning sleep, Maloney said that unlike your typical college student, “I value that very much. I’m usually in bed by 11:30, at the latest 12, and I always like to get eight hours.”

Academics, though, remains a priority. “I mean, we’re here for an education, not for a social life or sleep,” he said. He has several sources of motivation: not only the 3.5 GPA requirement for keeping his full-tuition scholarship, but also his “desire to go to medical school” and the “self-satisfaction” that comes from achievement.

One might very well wonder what specific techniques help Maloney achieve success in his many different endeavors. Does he, for example, know how many hours it’s going to take him to study for a test, so he can schedule just that many and no more? No, he said, because it really depends on how quickly he is grasping the material.

He does use the study strategies of making flashcards, going over course material with a group, and finding a quiet place to study the evening before a test. He said that having a job and athletics to plan for along with academics actually helps him have good time-management skills.

“You can’t be late and you can’t procrastinate, because you just don’t have time for that,” he said. He also said that competing throughout the whole academic year rather than only one semester has its advantages, in that it provides consistency.

Maloney has had to limit his extra-curricular involvement to some extent, though. He used to be a leader in the ministry Young Life, but had to stop because it was such a large time commitment. He does, however, attend Grace Bible Church regularly with a group of friends.

When there’s a scheduling conflict between work, running, and classes, Maloney said it’s important to have plans in place from talking to his coach, bosses and professors ahead of time. He also said that it helps that at VWC, they are “understanding.”

“It’s definitely nice to have a coach who cares about our academics. He makes sure we have time for academics. He drops the hammer when we’re falling behind,” Maloney said. He gets that sort of guidance from his parents, of course, but said it’s good to also have someone on campus to help fill that role.

A key component of the way he balances his various commitments is that he tries to get his schoolwork done Fridays and Sundays, leaving his Saturdays free unless a meet is scheduled.

“It’s important to have that, so that on Monday you’re geared up for the rest of the week. You’re not worn out from working all weekend, pushing yourself too hard,” he said. 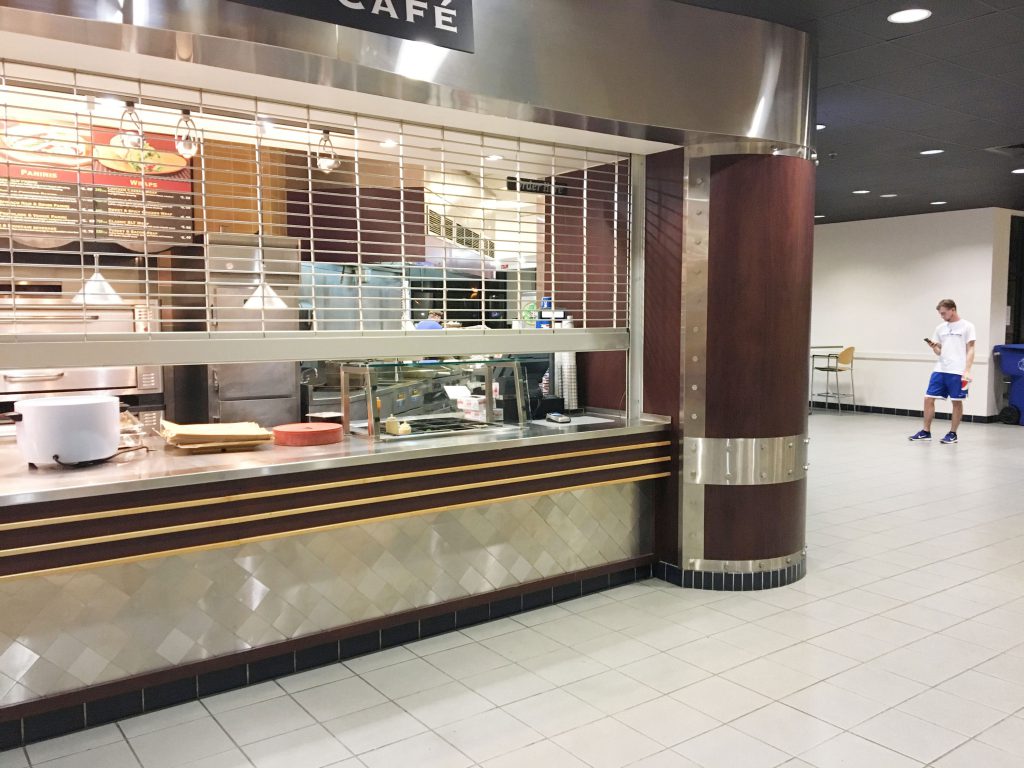