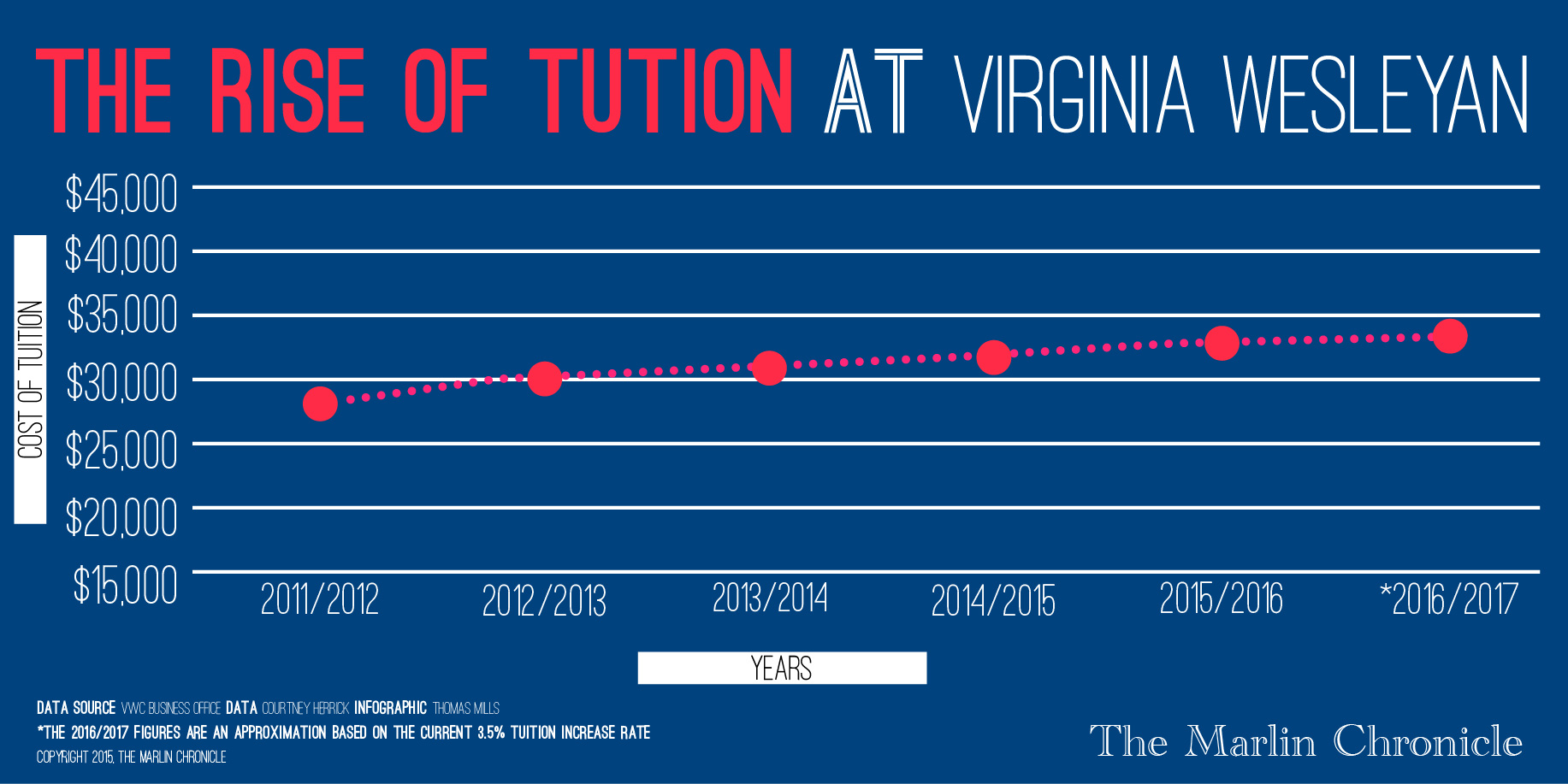 The cost of college tuition is constantly on the rise. According to bloomberg.com, the price of colleges in the U.S. has increased faster than the rate of inflation. College Board states that the average increase in tuition from 2014-2015 was 3.7 percent at private colleges, while the U.S. inflation calculator estimates the inflation rate to be 0.8 percent. That’s more than four times the amount of inflation.

Virginia Wesleyan College’s board of trustees recently approved tuition and room and board costs for the 2015-2016 school year. Tuition will see a 3.5 percent increase, while room and board rates will increase by 1 percent.

Next year’s tuition increase will be the lowest increase the college has seen since 2011.

A letter dated Jan. 22, 2015, signed by President William Greer, was sent to students notifying them of the tuition increase. The letter let students know of the recent changes to faculty, renovations, and financial aid that have taken place in recent years.

The letter also stated that the tuition increase is due largely to the new things that we will have here on campus.

The college will have a new turf field and a new academic facility for the fine arts. Additionally, with the tuition increase, students will have better opportunities to study abroad,

get internships, and do undergraduate research.

In a compilation of data from Cary Sawyer, vice president for finance, next year’s increase will be the lowest increase the college has seen since 2011.

Teresa Rhyne, director of financial aid, said “We are offering the Wesleyan promise again this year which is a way for the students to augment their scholarship money that they already have.”

Rhyne was unsure what her budget would be for next year, so she was unable to speak of what amount of money the financial aid office will be able to offer to students. The budget will determine how much money is given out and how many students receive the money. Rhyne said that students could get additional funding if they apply for the Wesleyan promise.

“College is a lot of work and students deserve to be given more incentive,” freshman Sarah Puchalla said. She feels the office of financial aid should review student’s academic records yearly, so that students could receive more financial aid if they are performing exceptionally well in the classroom.

In regards to financial aid packages increasing due to exceptional academic performance, Rhyne said “The only way to augment (scholarships) through good grades and everything else is through the Wesleyan promise.”

She highly encourages students to apply for the scholarship of the week and to create a profile on fastweb.com so that students can be alerted about scholarships that they qualify for. She feels it also helps if students are more proactive in looking for scholarships.

Despite the 3.5 percent increase in tuition, Puchalla said “I’m going to stay.”

It is unclear whether or not enrollment will be affected with the increase; however, the Bloomberg article additionally mentions that “higher education enrollment, including at two-year colleges, declined in 2013 for a second straight year, the U.S. Census Bureau said in a September report.” The decline in enrollment that institutions saw could have been because of the increase in tuition. VWC may see a decline in enrollment for the 2015-2016 academic year.

With increases in tuition come students who would much rather graduate early than stay another semester or another year and have to fork over more money for their education, which in turn affects enrollment numbers.

Junior Troy Aubut said “I’ll be skipping out on a semester, so the increase won’t affect me too much.” Aubut considers himself lucky that the government has afforded his education since his father is military personnel. “I haven’t had to take any loans out. Increases don’t affect me much.”

Other students feel the increase will affect them indefinitely, despite the fact that it is the lowest increase in recent years.

“There’s a lot to think about,” sophomore Alvin Parker said. “I don’t know if I have the funds to be back here or not.” Parker is almost positive he will have to get a second job to afford his education at VWC. “Eventually, the money I have won’t be able to pay for it. I’ll have to come out of pocket.” Parker also feels financial aid could make it more affordable for students to attend VWC and continue enrollment here. “I’m sure there could be a better solution to spreading the wealth,” he said.

More financial solutions and assistance for students will definitely be essential if VWC plans on keeping enrollment high and student concerns about the rising cost of tuition low.